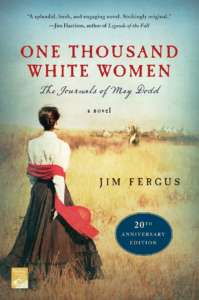 This historical novel is based on a real fact: in 1875 the US president Grant signed a treaty involving the trade of 1000 white women for 1000 horses and was called “Brides for Indians”; the women were recruited from jails and mental hospitals prisons and were supposed to marry Cheyenne Indians. May Dodd, the book’s protagonist, enrols in this program after being institutionalized, by her parents, in a mental asylum and had her children taken away because she fell in love with a man from a lower class. Mary sees the “Brides for Indians” program as a way to break free from the asylum and so she decides to volunteer. An interesting book with an original and fascinating setting that upset some of the most feminist readers.