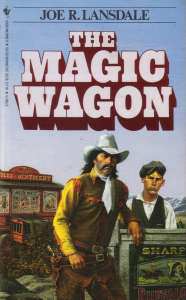 Texas, 1909.   While the saga of the West  is quite over,  an eccentric rag-tag band wanders from city to city in a carriage made from the wood of a tree sacred to the Sioux, performing acrobatic feats and selling an odd miraculous concoction.
The gang comprises: Billy Bob, a dapper gunfighter of violent disposition; Albert, the wise Afro-American; Alluce Marcio, the trained orangutan;  Buster,  the young narrator, and Wild Bill Hickok’s preserved body, the show’s attraction, and supposedly Billy Bob’s father.  However, the gang of scoundrels seems to be cursed and Buster is ready to bet that this is due to old Wild Bill wanting to gun sling again from beyond the grave.

Lansdale’s first novel, written in 1986, describes a twilight and unusually rainy Far West.  At the same time, the text does not lack a thin layer of humour, even though it does not maintain the same crackling tone we find at the beginning of the novel and many situations seem to come to a resolution too quickly.  The same can be said of the characters:  an interesting mix but quite weak.

This novel is not suited to those who look for realism, no matter what, in literature. On the contrary, we suggest this work would suit those who just want to have a good read even if the work is not a masterpiece.

Tom Phillips
Barbara Ungar’s impressively wide-ranging collection is prefaced with two aptly chosen epigraphs which serve to introduce the philosophical terrains across which many of these...