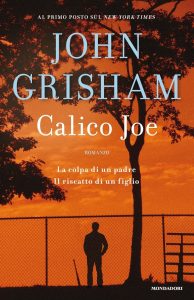 Paul is Warren Tacey’s son; Tacey used to be a professional baseball player who is now old, an alcoholic and lonely. Paul and his father don’t talk to each other. The reason is to be traced back to the time when Warren’s star in decline crosses paths with rising star Joe Castle called Calico Joe: what seems to be an unfortunate accident that stops forever Joe’s career, ends up assuming for both father and son, the outline of a tragedy that separates them in an irreparable way. However, after discovering that Warren is going to die of cancer, Paul decides that the only way to silence ghosts and remorses from the past in Warren’s head is to put him in front of his past opponent who is now reduced to living on a mental disability pension.
A sweet and sad novel, very far from the stories full of tension and coups de théâtre to which Grisham has his readers accustomed. Calico Joe is a moving short novel that can be read quickly and that is worth to being known also in Countries where baseball is not played. Terms and references are used only to create the atmosphere and recall images for spectators’ eyes; it is not necessary to know the rules of the game to enter the spirit of the novel.