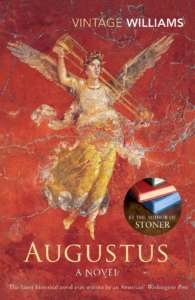 The human aspect of power

Considering the large number of people who have discovered John Williams’s writing through his most famous novel, Stoner, this “new” book of the year 1972, republished on the wave of the author’s delayed success, could make us sense the musty smell of the sales strategy.

Nothing could be more wrong. We’re dealing with an ambitious book, which gives the reader food for thought offering a vigorous and deeply human portrait of the first Roman emperor Octavian Augustus, by overcoming the limits of the historical novel. Augustus is purely a work of fiction and, as stated in the preface, it openly gives up chronological order and historical accuracy, in order to introduce us to the story of a man who will change the world.

The author chooses to show the most human, intimate and complicated side of the emperor, charming the reader with the splendid prose and the echo of the historical events of ancient Rome, torn apart by civil wars, corruption, intrigues and power struggles. Through a polyphonic composition, John Williams relies on diaries, military reports, verses and fragments of letters, creating a  complex but captive text.. He entrusts the story to men and women who have crossed the path of Octavian Augustus, either friends or enemies, each of them having distinct narrative perspectives and points of view.

Thanks to Williams’s ability in creating  characters’ psychological profiles, Cicero, Marcus Agrippa, Marcus Antonius, Maecenas, Augustus himself and his wives, mistresses and many others, including Julia, the daughter, guide us through the contemplation of the World Emperor’s heart and soul. Augustus’s strength consists in the humanity given to the main character, leaving the narration’s historical accuracy on the back burner. The intimate and tragic portrait of Octavian Augustus conceals pages of extraordinary beauty, that affect and raise questions on the writing, passions, desires and the human nature. The reason of state, the compromises, the sacrifices, the solitude and the conflicts of a man destined to carry the weight of the world on his shoulders are split among the multiple roles of the main character: Augustus as a boy, as Julius Caesar’s adopted heir, as a young man at the head of an empire; but, most of all, as the man always struggling between public duty and private longings, between being the emperor, honoured as a god, and being a devoted father, a husband and a lover.

A lonesome man emerges, crushed by his responsabilities. Williams succeeds in bringing us closer to him; so, eventually, we forget about the historical character and see him as a simple man.Particularly touching are the pages concerning the relationship with his beloved daughter Julia, a contradictory symbol of the female role in the capital of the empire, who will even be “used” as a bargaining chip. Rome, which has finally attained peace and prosperity, cannot imagine the hidden costs that come with them: waivers, alliances, marriages, intimate suffering. The pages in which he ceases to be the World Emperor to take on the father’s role are the most intense and intimate ones. A deep melancholy, hard to ignore, characterizes them. It is clearly a reflection on power that goes beyond time and space: we look into the heart of an emperor, we recognize the duties he must fulfill and the excessively high cost that sometimes comes with governance.

Translation by Selma Meti, edited by Ana Ahmetsulaj and Anita Olivetti; final edit by Jenovia Amisti Smith.
Ana Ahmetsulaj and Anita Olivetti are students of the Linguistic Sciences and Foreign Letters faculty at the Catholic University of the Sacred Heart in Brescia, Italy; they collaborate with Inkroci in the translation project coordinated by Professor Jenovia Amisti Smith.