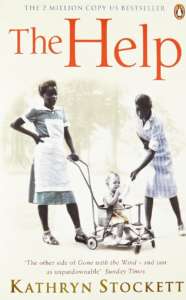 The Help is a choral historical novel with three main characters, two black women and one white girl living in the segregated Mississippi during the ’60s. Aibileen works as a maid for Elizabeth’s family and looks after little Mae Mobley. Minny’s a fantastic cook but always gets in trouble for speaking up. Skeeter is the young daughter of a plantation owner; she dreams to become a writer and is obsessed to find out why her beloved nanny suddenly left her family. Nobody would have thought that these women would become friends, especially in Jackson, one of the American towns with the highest rate of hate crime at the time, and yet out of necessity they start working together on a very brave, but also extremely dangerous, project.

Apparently, this book was rejected by more than fifty literary agents before Susan Ramer agreed to take Stockett on as an author. Since then, it’s been published in over forty languages, and a movie based on it hit the cinemas in 2011.