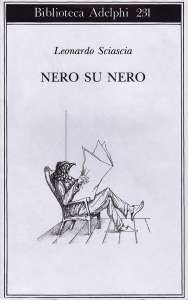 “The emperor is naked”, the intellectual said

Black on Black [Nero su nero] was published in 1979, when Leonardo Sciascia was already known to the wider public for his so called art of digging and for his desire for truth. From this collection of considerations on the social, political and customary humanity that surrounded him, the reader rightly expected, concise clarity. He gets, now as then, much more than this: names and places change, but the analysis is well suited to today’s citizen.

The author writes, observing with an experienced eye, using an everyday language not only about daily news, but also about literature, homosexuality, civic stance, ancient and modern authors. Only a few people can master a way of writing which encompasses such cultural input and craftsmanship.
The intellectual’s task is to say that the emperor is naked; and Sciascia, by doing it, doesn’t disappoint his readers.
He is masterful and keeps up with an Italy where unfortunately changes are only apparent.