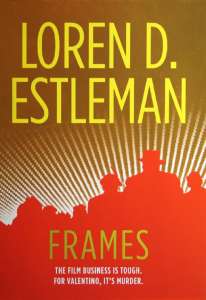 Valentino is a UCLA archivist and likes to call himself a film detective, since his main occupation is to find and recover the oldest silent movies ever made. One day he sets out to find a new space where he can show these movies but due to a limited budget, he can only afford a movie theatre which has been abandoned for over fifteen years. Having signed the agreement, he discovers that the old projection room holds a secret: the reels of the movie Rapacity, a masterpiece by Eric von Stroheim, a film with a tragic story and considered lost. Moreover, the old film is guarded by a skeleton…

Frames was written in 1976 and has a pleasant retro taste. Reading it is a pleasure for even the most fine-eyed cinephile: there are frequent references and winks to cinema and Hollywood, concentrated above all in the the protagonist, who is inspired by Kevin Brownlow, a famous critic who made the first great filmmakers rediscovered by the public, thanks to monographs, interviews and restorations. The plot is original, and the rhythm is tense, expertly constructed: it is recommended to all thriller lovers, but above all to cinema lovers and nostalgic collectors, who cannot avoid identifying themselves in the protagonists of the story.

The homonymy with the famous actor exposes him to far too obvious jokes: this is why he is firmly determined not to reveal his first name to anyone.
Today I would like to talk to you about this crackling and atypical novel by Loren D. Estleman, an author who deserves to be better known, while he is a small celebrity in English-speaking countries where he has published many books.