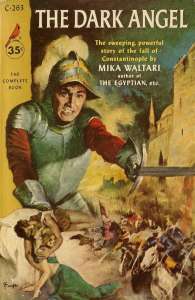 The end of an era

1453: Constantinople is going to fall into Turkish hands. It’s the end of an era.  Among the fatalistic desperation of the Eastern capital which has only a few days left, the power struggles and the unspeakable silence which undermine any attempt of defending the city, love and selfless heroism blossom. Who is the mysterious protagonist,  Johannes Angelos, the first-person narrator, the adventurer who has come from far away to share the last moments of a civilization?
Angelos, a modern angel of death,  despite being overwhelmed by the love for the beautiful and noble Anna, will decide his own destiny, not wanting to live in new era, that of the young victorious sultan, described by him as “life without hope” and “death of the spirit”.

The Dark Angel is a novel that captures the reader, makes him/her spellbound by its melancholy and mystery. Not only is it a picture with a great historical, philosophical and moral value, powerful and of rare beauty but is also extremely topical, as it was written in the aftermath of the Second World War.