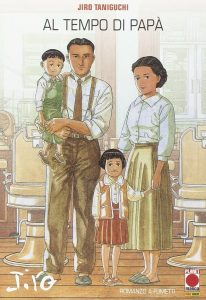 The importance of family

The phone call that tells Youichi about his father’s death is like a blast from the past. A past he thought he had left behind, choking him with work and the countless engagements away from home.
The return to his native village is made up of few and faded memories, and many emotions, some pleasant, others painful: in particular those related to his parents’ separation, for which he’d always held his father responsible and who he’d always held a grudge against all his life. The main character’s story is the story of many of us: the hatred harbored by children overshadows memories, making them look like a painting with more lights than shadows. For Youichi, however, returning to the village is a revelation: the stories of friends and relatives reveal a father truly dedicated to his family, while he remembers him as a very distant man. Only now he realizes how his animosity made him lose sight of many moments in his life. He is eventually able to return to his loved ones, despite the embarrassment caused by his stubbornness. Not only is Taniguchi’s distinctive graphic sign in the faces (far from the typical manga style oval ones with big eyes), but also in a soft style, in both the characters’ features and in the landscape. Through this graphic novel, the author expresses a deep personal drama with dialogues and situations, and does so with wisdom, focusing on frames that give the work a vibrancy in stark contrast with the character’s self-consciousness. An enjoyable and well-constructed work.