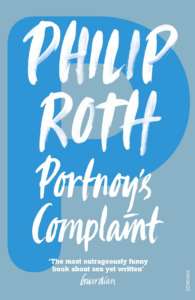 The recent passing of Pulitzer Prize’s recipient Philip Roth, who is also considered the most important contemporary American writer, has brought him back in the spotlight, as many readers have now run in book shops searching for his works. But where to begin? We asked the same question to the Italian researcher Francesco Samarini; he works for the Indiana University as expert in Italian literature and especially cures Roth’s reception in Italy. His advice for us has resulted in the choice of “Portnoy’s complaint”: a funny, short and easy reading suitable for the entire public. Despite being one of the author’s first books, the work already contains two anchorages typical of Roth’s way of writing that are the penetrating look into reality and the obsessive form. As a consequence, according to Samarini, the author’s writing style expresses itself through a nearly frantic irony therefore the reader has to make a further step, going beyond the mere entertainment.

The main character of the novel is Alex Portnoy. With the help of the therapist he recalls his entire existence: starting from his Jewish family to arrive to his real concern that is sex. In fact, after a lonely but still active adolescence, Portnoy repeatedly jumps into relationships exclusively with non-Jewish girls. In this way, the man not only tries to physically penetrate  the women but also their community and social space.