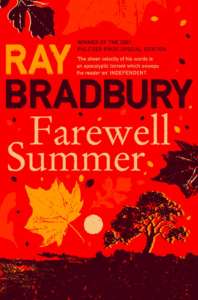 The Enchanted Summer tells the story of Tom, Doug, John and other kids (and adults) who live in Green Town, a small town in Illinois, during the Summer of 1928. Their life is a life still marked by peasant rituals, represented by the dandelion wine that Doug’s grandfather makes with love, but it is already a modern life in many other aspects, as evidenced by the presence of cinema and drugstore.

The pages of this wonderful bildungsroman (novel of education) are characterized by the poignant poetic streak of Ray Bradbury, marked by a nostalgia that calls  dust, heat, summer evenings spent together to mind, along with the regret of what it will no longer be: the Summer of 1928 or a part of our life, although it will be possible to recall it throughout Winter, while drinking that dandelion wine that, according to the main characters, tastes like their favourite season; the perfect season.

In a series of episodes not always related to each other, the author makes children and the elderly act: the future and the past finally dialogue. While the former has brand new experiences, the latter relives their Summers, their memories, showing the reader how each individual forms himself through the achievements, large or small, he has accomplished in life.

Although primarily known for his science fiction writings, Bradbury has cultivated  also an intimist and lyrical character, which, in addition to highlighting his enormous artistic talents, allows us to approach his style from a very different and original prospective throughout his long career. I recommend this novel to those who love summer, nostalgic atmospheres and clear and poetic prose.