Home Reviews Pocket Reviews Robert A. Heinlein – The moon is a harsh mistress 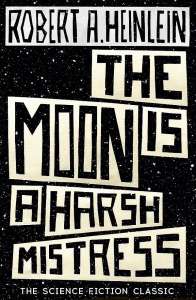 How a revolution is born

In 2075 the moon is used as a penal colony by the Terrans, where all types of scum are exiled. Forced to live in underground cities where technological support is essential, the settlers have built a new type of society, in which every independentist jolt is choked by the Terrans, who intensely exploit the resources of the colony through a complex computer network and an ingenious interplanetary transport system. Mannie, the protagonist, discovers that one of the computers has evolved into a sentient being: he becomes its friend and, together, they join a faction of revolutionaries who aim to gain Moon’s independence through a civil war.

At the base of the novel is the colony’s society, imagined by Robert Heinlein as a reality devoid of a true state organization and where the responsibility of the individual is the only brake to degenerative chaos; the opposite of the motherland, interested only in exploitation and oppression, carried out via thought manipulation and technological tools which have replaced weapons and violence.

The reader will not find taking a stance easy: Robert Heinlein’s intent is to show how a revolution is born and develops, how a person who is substantially foreign to politics can not only find himself involved in its process, but also becomes its leader, and finally, to analyse the psychological mechanisms governing the society of the colonizers and the psychological processes triggered when their authority is questioned.

Although it is old-fashioned in certain descriptions, Robert Heinlein’s novel is still a compelling and enjoyable read, worthy of appearing in every reader’s library. It is a classic of science fiction, a great novel I recommend to the fans of the genre or to those simply intrigued by this theme.