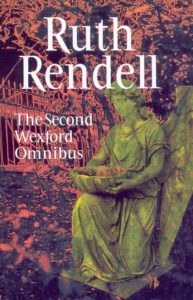 People like Wexford because he’s not pleasing: he’s got a potbelly and sometimes he’s arrogant in showing off his culture, especially the classic one. People appreciate him, even if it shouldn’t be like that. Perhaps it’s because in his investigation he doesn’t want to achieve a conclusion in accord with the current moral standard: he’s not interested in imprisoning the criminal and make him pay his debt to society by sending him to jail. His aim is to unravel the mystery and to reveal all the facts which were incomprehensible at the beginning of the story.

The places and the atmospheres are the ones of the English’s province, halfway between Miss Marple’s farmland and the foggy Sherlock Holmes’s London.

Ruth Rendell offers the reader three novels[1] in which her detective is the main character, as if the reader was invited for a tee and a slice of cake. Three irresistibly “british” novels.