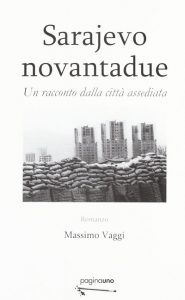 The dream of football and the sense to flee

1992. Milo lives in Sarajevo and is a promising young talent for the local football team. He is sixteen years old and still going to school; he is in love with Lana; he is a friend of the historian Professor Zivanovic, and his father is a journalist. But now, on April 4th, there is war. It is the end of a world. No aspect of everyday life has been spared. You have to hide, defend yourself, survive bombs and snipers. The future does not exist anymore: there is only the siege. The only option seems to be to escape. An escape that just might be possible. But does it really make sense to flee? And is it essential to take sides?
Massimo Vaggi, who participated in a mission to Croatia and met with refugees and former combatants, narrates a fundamental episode in recent history, now almost completely removed from the collective awareness. He does so by entering completely into the besieged people’s everyday lives, especially through the eyes of a boy and a professor who cannot reconcile the meaning of the past (which ended the day before) with the present. The dream of football, with its promises of glory and wealth, perfectly represents the loss of meaning in a fratricidal war where victims and perpetrators are abandoned to themselves, but also the obstinacy of wanting to live normally despite the bombs.
This is a novel that rattles the guilty indifference towards the largest conflict in Europe since World War II.