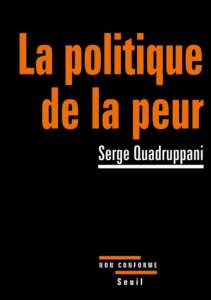 None other than our world

In his essay The politics of fear, what Serge Quadrupani shows us, as Wu Ming 1 say in the preface, is none other than our world, without the slightest transfiguration or “creative license”. Through the examination of some exemplary cases well known, the French writer describes an alarming overview of the aggressive border defense drifts in Europe, particularly in Italy and France. Starting from the last century, he shows us how to build a public enemy, as the so-called security is nothing but a war on our rights and our freedoms, implemented by fomenting our fears: a scary scenario, of which we are accomplices and victims at the same time. Because if we are convinced that we have mortal enemies that attack our tranquility and our well-being, it will be easy for us to be manipulated by the strategies of power, culminating in the illusion that a strong man will defend us, and that the best defense is prevention: through control technologies, special (and illiberal) laws, preventive wars and a police and military logic applied across the board. Quadruppani shows us all the dangers, forcing us to reflect on how easy it is that, in a similar situation, sooner or later the enemy will be us.

A book that thrills and perturbs deeply, perhaps also thanks to the fact Serge Quadruppani is not a theorist or a thinker, but a writer who tries to understand what happens and tries to explain it in a clear and understandable way.
The essay was written in 2011 and integrated in 2013 for the Italian edition, but it is very timely, demonstrating the validity of the theorems exposed and the emergency we are facing; which is not that of an external enemy, but that of an internal enemy.
Commendable and contingent.