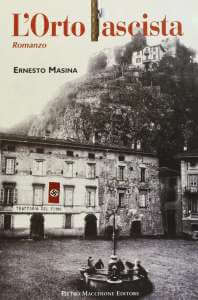 It’s with clear delight and gentle writing that nearly octogenarian Ernesto Masina challenges himself with this first work, a tragicomic, fantasy story set in Breno, in the upper Vallecamonica in 1943.
The event the title refers to is an attack to the village’s Orto fascista (Fascist garden), a symbol of that ridiculous and inconclusive autarchy, so paraded by Benito Mussolini. The plan is plotted, like in the best small villages tradition, in a tavern during the German occupation, and unfolds in a series of misunderstandings, told from different points of view by some of the protagonists who, between a smile and a semi-serious consideration, lead to an unexpected ending.
The story gently discloses between the river Oglio’s coves and the mountains, enriched by characters perhaps a little stereotypical but who make both the historical and the geographical settings believable: the province in the Italian fascist period is well represented by caricatures of that Italian character, shining with vices but poor in virtues, which still plagues us daily, in spite of a globalized society that requires us to be cosmopolitans.