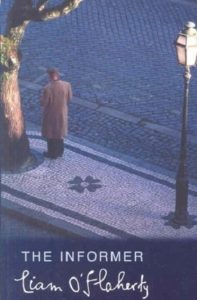 Poverty and misery are the real protagonists of a betrayal occurring during twelve hours, su-perbly told by Liam O’Flaherty. Human beings often lousy, petty situations and pride’s flash-es, under a Dublin night, during the darkest moments of the tormented struggle that lead to the independence of Ireland, in the 1920s. The book is about a modern Judas who, squandering the money he received because of his infidelity to the cause, becomes, for theorganization he deserted, the lethal virus to defeat at any price. A disenchanted and unconventional novel about Irish history, with atmospheres and tension well balanced, and without stereotypes about the good ones (the Irish) and the bad on (the English). The characterization is splendid: the best described character is Dan Gallagher, leader of the organization, symbol of a lucid madnessoften associated with the most uncompromising revolutionaries. A believable portrait of human duplicity.