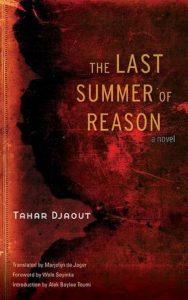 Prophetic and desperate
The Last Summer of Reason is an untitled manuscript found among the author’s papers after his death: the story of a bookseller who doesn’t want to surrender to a religion that yearns to kill reason. In order to affirm its beliefs, in fact, Islamic fundamentalism immediately attacked every culture, thought or word not aligned to what it considers the only Great Book. This ex-tremism, representative of all religious fanaticism, according to the author, imprisons one’s soul, rather than setting it free, as it should, in the name of a god shaped by human meanness.
A lucid and poetic reflection on religious fundamentalism which, along with nationalism and racism, plays for the primacy of the most infected and irrational sores of humanity. With this spiritual testament, published after his assassination on June 2nd ,1993, Tahar Djaout – Alge-rian poet, journalist and writer – will be remembered as a martyr of the too many religious wars.