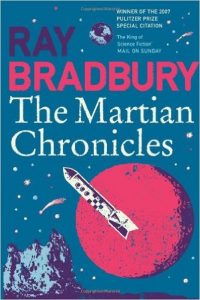 When sci-fi and poetry come together

A collection of short stories about humans’ troubled landing on Mars, and the following attempts of colonization of the Red Planet. A suggestive writing describes surreal and poetical characters: a father who recognises his dead son in the alien creature, a priest with a missionary destiny who finds a new kind of religion, a scientist using atoms to replace his lost family. Bradbury depicts hopeless humans, unable to learn from their mistakes, thus repeating on Mars all the destructive dynamics that devastated the Earth. Colonization though, only lasts a few years, as a new war forces humans to go back home to fight. Only the last story, The million-year picnic, gives us a spark of hope.
A sometimes tough, but very rewarding book.