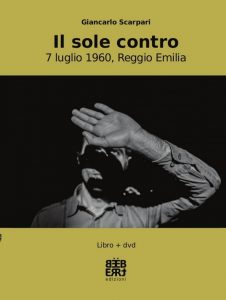 Spring 1960: In order to get the parliament on his side, Fernando Tambroni’s Democrazia Cristiana political party needs the support of the neo-fascist Movimento Sociale Italiano lead by Giorgio Almirante.
30 giugno 1960: the police attacks protesters in Genoa, and the conflict goes on until the middle of the night. More strikes in Milan, Livorno and Ferrara follow.
7 luglio 1960: a peaceful demonstration in Reggio Emilia ends in blood, with the police shooting at the crowd. 5 dead and 21 injured. A massacre.
Giancarlo Scarpari, through a documented historical analysis of events and a meticulous account, shows us the horror of those repressions decided by neo-fascists and a weak and unstable government. There’s more: examining the trial records and the Assise of Milan’s Court sentence on 14 July 1964 prove that the authorities’ cover-up to clear institutional forces of all charges. A pretend-process, just like many others in the following years.
The DVD documentary included in the book by Giuliano Bugani, investigates the events through the eye witnesses’ accounts.
Both the book and the film are an invaluable and dreadful evidence, detailing all facts and describing the political and social climate of the time. Proving that, what was later called the strategy of tension, was already ongoing since before the 1969 slaughter in Piazza Fontana.
An essential book to build historical awareness and understand what happened later on, up to the 2011 Genoa’s G8 events, and beyond. Praiseworthy and essential.