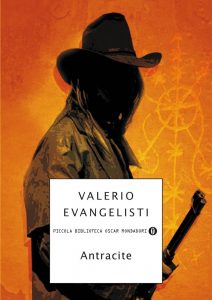 Coal will bury them

Ten years after the end of the Civil War, the United States are in the hands of powerful and ruthless industrial groups. A group of Irish miners pushed to the extreme, hires Pantera, a mysterious gunslinger-sorcerer revealing the clash between the two opposing souls of America and the world. Beyond the disruptive social conflict, this is a struggle for dominance of the Country.
It is an excellent historiographical novel, although less exciting than the following ones: Evangelisti struggles to find his own voice, and the narration is not fully engaging. The fantastic elements, introduced only in the second part of the book, add nothing to a complex plot and the many universal aspects, being a little out of place. However, the story which unfolds through some key moments in the social politics of the United States, is accurate, well thought out and documented: induces the reader to reflect and to ask uncomfortable questions, so that we are more engrossed in history than the characters.
Evangelisti will do better with Il collare di fuoco, Il collare spezzato, Noi saremo tutto, Tortuga and Il sole dell’avvenire, but this first turning point in his narrative is a happy one, and the book is not a superficial reading. Do not miss the bibliography at the end of the volume.