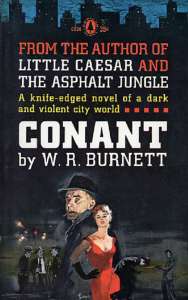 Conant is a classic gangster-like thriller that sees a journalist facing a crazy crime organization and that shows some noir moments of undeniable charm.
Burnett once again proves himself a master of painting a dark and violent world, the one directed by the architects of corruption, the men who push the buttons and spin the wheels of the political machine. A world that crushes men like Conant, caught in the middle by Nick Worden, an apparently benevolent tyrant of the Organization, and by Leone Worden, who represents the new generation of ferocious and unscrupulous men.
A challenge that will end in blood and that is a mere routine job for William R. Burnett: Conant is a no more than an entertainment novel far from the American author’s best works, but it is still enjoyable from the first to the last page, and demonstrates that blood is not water and that even works written for necessity can have their own dignity.