Home Reviews Read by the Professional Dan Simmons – The Terror 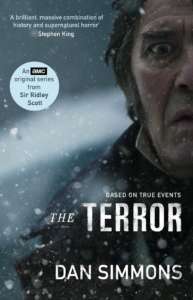 In 1845, the Erebus and the Terror, two English sailing ships, sail in search of the legendary Northwest Passage, but remain stuck in the cold’s grip, forced to fight against the elements and the desperation and madness of the crews.

Rearranging my bookshelf, this magnificent novel by Dan Simmons popped out. It manages to recreate the narrative style of Herman Melville and re-reads the authentic epic of two ships imprisoned in the ice of Alaska, beyond the Arctic Circle. Sea men in an ice desert; and when the long night falls, demonic presences crawl. A proposal to reinvent an adult horror by catching up with the classics.

In 2018 the AMC began broadcasting The Terror, a television series based on the novel, produced by Ridley Scott.