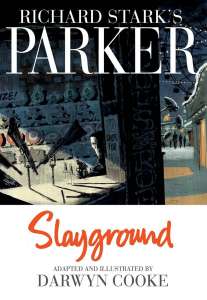 Hard boiled afternoon lesson: Slayground (in Italian Luna-Parker) by Richard Stark (pseudonym of Donald E. Westlake). Very strained, all set in a disquieting amusement park closed for the winter, where Parker is trapped by a ring of gangsters; in between the booty. And the mafia guys that pull the ranks of the policemen.
Read to learn: the graphic novel based on the novel, adapted and illustrated by Darwyn Cooke, is fantastic.

From the novel was also taken the same-name movie directed by Terry Bedford and interpreted, among others, by Peter Coyote, Mel Smith and Billie Whitelaw.