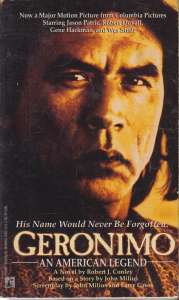 Geronimo, an American legend. Twenty years ago, Walter Hill’s movie was written by John Milius. I translated Robert J. Conley’s novel, which was far better than the movie: there is a much longer part, all in action, with Geronimo playing the American and Mexican cavalry by colliding the two armies; and there’s the story of Tribollet and the Tucson gang. Although Wes Studi, Gene Hackman and Robert Duvall were perfect in the movie version, the story was actually much less spoken than it turned out in the film, which had long scenes of whinings about words not kept but, when it came to action, it was a little poor. However, the way they rendered costumes and landscapes was beautiful, which reminded a little of Blueberry series episodes of Broken nose and The Phantom Tribe.