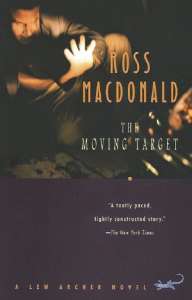 Detective Harper is instructed by Elaine Sampson, a high society lady, to find her husband Ralph Sampson, a wealthy self-made man in the oil business, who she suspects was kidnapped. The research will lead Lew Archer to become acquainted with the Sampson family and its entourage, stalking ‘holy men’ and declining movie stars, while discovering a very different truth from the one that he had been told, involving sex, greed, family hatred and crime.

Ross MacDonald (pseudonym of Kenneth Millar) remains one of the masters of hard boiled and thriller in general. Lew Archer is presented as midway between Marlowe and Hammer with a fair dose of bitterness, romanticism and a disenchanted libertarian spirit. Not without reason, he was also praised by Manchette, who in a way replicated certain features of his writing in a couple of novels, one of which was brought to the screen by Alain Delon in For a Cop’s Hide (Pour la peau d’un Flic, 1981).

Paul Newman gave a good interpretation of the detective in two movies (Harper, 1966, and The Drowning Pool, 1975) in which, for a superstitious eccentricity, he was called Harper because he did not want to play any character whose name started with “A”. In any case, The Moving Target looks like a manifesto for the genre: deeply grounded in the Sixties, in the movie version it displays an array of the best Hollywood faces, from Shelley Winters to Robert Wagner, not to mention Robert Webber and Arthur Hill, who were ubiquitous at the time.Today, stories with investigators seem a bit out of fashion, but they still retain their charm.