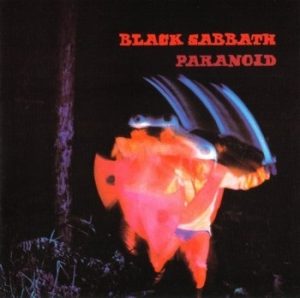 With their diseases and orgasm drugs and their sexless parasite life forms – Heavy Metal People of Uranus wrapped in cool blue mist of vaporized bank notes – And the Insect People of Minraud with metal music.

The origins of Heavy Metal.
This is a controversial subject but and unquestionable one for its fans: the search for the beginning of heavy metal is a journey that harks back to the late Sixties. Years of social, cultural and political breakdown. Years that propel the ruins of 20th Century into the modern day. Years that draw the lines of what music is and will be.

To music intelligentsia Heavy Metal is, first and foremost, the chaos of Kick Out the Jams (MC5 – 1968), the creeping repugnance of I Wanna Be Your Dog (The Stooges – 1969), the vitriolic wall into which Summertime Blues (Blue Cheer – 1968) crashes, the sonic delirium of the solo in Machine Gun (Hendrix – 1970) and Pete Townshend throwing his guitar against a wall of amplifiers, or the steady, sexy paths taken by Led Zeppelin. All of this is, and at the same time is not, Heavy Metal.
Heavy Metal is horns raised to the sky, it is the required black dress code and rock-like power chords. Heavy Metal is fans with torn up t-shirts and studded bracelets. That Heavy Metal was born in Bimingham in 1970 in the wake of that randomness that becomes legend when it meets history.
Tony Iommi is a promising, young left-handed guitar player, on his last day of work. Only a few hours to go, spent in front of a pedal press machine, and then he can give it all up to devote himself professionally to music. The band in which he plays, The Birds & The Bees, is engaged in an European tour: the perfect occasion to leave behind the grey ruins of the Midlands.
Just a few hours of work left, a couple of pints in the pub to say goodbye to friends, and then just the dream of a new life hanging by six strings.
It would be good to think that if the story had gone that way, Heavy Metal wouldn’t have had been born.
It would be good to think that getting two fingers crushed in a press machine on the last day of work before an European tour was a lucky break.
It is good to think that young Tony Iommi’s strength of will has universal values and repercussions which don’t just concern his life, but millions of lives that will find meaning in his future music.
Tony Iommi is missing the tips of two fingers on his right hand but he doesn’t give up. He creates two leather prosthetic thimbles and goes about wearing out kilometers of guitar necks with his practising and fingering and understands that he won’t be the same guitar player anymore, that some chords have become impossible to play, that the strings are too hard and painful. He starts to play simplified chords (power chords), he slows down his performances and focuses on the timbre and the weight of his sounds, he looks for alternative tunes which allow the strings to be softer and less painful to the touch, in other words he codifies a new sound, an apocalyptic and sinister melting pot: Heavy Metal.
His travel buddies are the best that the Birmingham underground can offer: Geezer Butler (an out-of-tune bass player with a knack for visionary lyrics), Bill Ward (a percussionist with an elegant style but who also drums in a coarse and powerful manner) and Ozzy Osbourne (a dyslexic and crazy non-singer, a reject with an artistic desire whose only strong point is having a voice system).
The band abandons the previous name Earth, due to a coincidence of names, and decides to use the title of Mario Bava’s movie I Tre Volti della Paura (translated into English as Black Sabbath). They start to achieve success thanks to a darker and more visceral approach in comparison to other rock-acts of that time such as Deep Purple and Led Zeppelin. After only four months from the release of first album of the same name (an immediate commercial success), the quartet go back to the recording studio and, in straight recordings over five days, they produce their career masterpiece, a corner stone of the genre, a reference point for anyone who wants to “play heavy” in the forty years to come: Paranoid.

Black Sabbath’s instrumental alchemy lives in an unusual complementarity composed of guitar-bass-drums, with a rhythmic section dishing out executive virtuosity and propelling the song texture, while the guitar supports the ordered, but heavy, rhythmic sections and the acid blues solo fugues. On the song’s global sound spectrum, the frequencies of the three instruments are very close to each other, they often resound together and contribute to create a patchy wall unequalled during at that time.

At a time when the figure of the “guitar hero” is taking shape, the essential quality in Iommi’s music shows us his ability in composition even before his ability in execution: one after the other, he carves out unsurpassed and unequalled guitar solos which make him the absolute riffmaster of modern guitar.
The first track in Paranoid is War Pigs, a sequence of fills ad gaps, which is perfect for Ozzy’s vocal prowess. A political song where the lyrics wisely play onto the parallelism between real evil (war) and metaphysical evil, War Pigs should have been the name of the album, but the record company was firmly against it (we can see evidence of the disagreement in the artwork which depicts a warrior with sword and shield emerging from the darkness).
The song that follows, Paranoid, is probably the most famous in the band’s whole career. Chosen as a single, although it was actually a filler (it was written in three minutes at the request of the producer Rodger Bain, who complained that another short song was needed), in its two minutes and fifty-three seconds, Paranoid is the abc of the Heavy Metal song: a simple but effective riff, with fast rhythm, breaks in unison and vocal power.
With just two songs, Black Sabbath, besides giving the world two of the most important metal songs ever, demonstrated a legendary compositive flexibility, proving to be perfectly comfortable both with ten-minute-long complicated electric frames, and with lightning-fast tracks more akin to a pop song.
The next track Planet Caravan continues to amaze the listener: it’s a song suspended in a creepy psychedelia, made up of Ozzy’s eerie storytelling and the rhythmic tolling of the percussions, that sails onto a sea of sounds sustained by Butler’s groove and by an almost jazzy Iommi.
The first side of the album ends with Iron Man, a paradise of riff and Sabbath sounds, with its fabric of heavy rhythms and Osbourne’s voice, a counterpoint for the guitar, in that straggled style that becomes more than a “trade mark”. If Black Sabbath wanted to be part of popular music Olympus, this side of the record is more than enough to create an unforgettable collective unconscious.
The other side of the album doesn’t reach the heights of the first four tracks, but doesn’t disappoint, and contributes to define a mature and highly recognizable sound with several minor classics such as Elecric Funeral (with a rhythmic wha guitar and unexpected changes of direction) or Fairies Wear Boots.
If we consider periods and styles, Paranoid, with its sound revolution, creates an impact comparable to the importance of Bach or, to stay within the realms of a similar genre, of The Beatles.
Black Sabbath are the beginning of something that, seen forty years on, maintains the freshness and newness typical of revolutionary masterpieces.
They are the appeal of unique moments, of the turning points and the direction of paths.
They are a history that we live in delay, but appear to be a neverending present.

Pina Piccolo
I would have liked to be patti smith. Locks of rebellious gray hair. Indomitable gaunt visage. The jacket: the worn-out one from Horses that dangles carelessly from a shoulder. And to continue tapping with your slim...

Heinrich Heine – Who killed Mozart? Who beheaded Haydn? Crimes for...