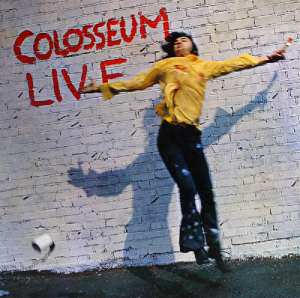 A Rope Ladder to the Moon

If there’s something that really pisses me of, it’s that in the chaotic world we happen to live in, ruled by media garbage and tsunamis of information disorderly pouring into brains that become less and less accustomed to do what they are supposed to do, excellence and mediocrity mingle in a swirl with no scent, taste or colour. Furthermore, since mediocrity largely prevails on genius, such sewage will tend to have an increasingly more disgusting taste. This lecture is just to say that I find extremely unjust that the majority of music listeners, be they young or mature, know (and will remember) music bands like the Pooh but ignore (and will keep doing so) the Colosseum band.
Let’s try to fix this gross injustice.

Colosseum were formed in 1968 from a part of John Mayall’s Bluesbreakers. Drummer Jon Hiseman, bassist Tony Reeves and the immense saxophonist Dick Heckstall-Smith, once finished the recordings of a masterpiece of British blues such as Bare Wires together with Mayall himself (called in italy ‘The Lion of Manchester’), joined the forces with some rising stars of the English scene: keyboardist Dave Greensdale, bassist Mark Clarke, guitarist Clem Clempson and especially the marvellous vocalist Chris Farlowe, who boasts a voice as rough as a cheese grater.

The band had a pretty troubled life, studded with break-ups and reunions. The group’s golden age is undoubtedly from 1969 to 1971 though, when milestones such as Those Who Are About to Die Salute You (1969, translation of the Latin ‘morituri te salutant’, a sort of justification for the gladiatorial name of the band), Valentyne Suite (1969), The Grass is Green (1970, only for US market), the gorgeous Daughter of Time (1970) and especially Colosseum Live (1971) are published. Colosseum Live is considered one of the most powerful live album of the history of rock music: it is a double album recorded during two concerts (at Manchester University and at Big Apple in Brighton in 1971), an album whose compelling rhythms leaves you breathless from the first to the last minute.
So I would like to talk about this very masterpiece.

The lazy musical critics (defined by Frank Zappa as ‘people who can’t write interviewing people who can’t talk for people who can’t read’), prone to follow the diktats of the majors labels that always tend to create new genres with weird names in order to enhance their sales, marked Colosseum’s music as progressive, a label not really fitting a group that like only a few others was able to mix rock sonorities, jazz improvisation, research into blues and influences from popular music into large-scale compositions.
Colosseum influenced some of the most fresh and innovative Italian bands of that time such as Perigeo and Area. And the alluring idea, which has sometimes been aired, about a parallel between the voices of Chris Farlowe and of the young Demetrio Stratos (who will later dedicate his life to explore the unknown world of vocal cords) does not seem hasty at all to me.

The six long tracks of Colosseum Live (Rope Ladder to the Moon, Walking in the Park, Skelington, Tanglewood ’63, Encore: Stormy Monday Blues, Lost Angels) almost reaching 75 minutes in length, tremble with power and energy. Farrow’s nimble voice is a proper instrument counterpointing long improvised sections and solos of the other band members: the outstanding drummer Jon Hiseman (the undisputed leader of the group), holding the heart of a rocker and a mind educated by the lesson of the master Max Roach; the saxophonist Dick Heckstall-Smith, a giant by all means, playing both the tenor and the soprano saxophone (often at the same time!) in a way that recalls the ‘free’ sonorities of the visionary Erc Dolphy and the cryptic Ornette Coleman.

Let’s be clear about this: Colosseum Live is wonderful in its entirety, though I believe that it is always in their details that masterpieces can be recognised as such. This is why I am inviting you to carefully listen to the first breathtaking track of the album, Rope Ladder to the Moon, from minute 2’43’’ to minute 4’05’’, when the giant of the saxophone offers moments of pure musical poetry made up of suffering, exhausted notes, scratches on the skin, metal whips, scrapes of sound: a proper treat for your ears.

It sounds incredible that right after the publication of that terrific record, right at the climax of their success, the Colosseum – without arguments or outbursts (unlike many other cases) – broke up in September 1971, leaving loads of admirers in a disheartening musical coitus interruptus.
After all, if one can read between the lines, Hiseman & Co. told us from the very beginning: Morituri te salutant!