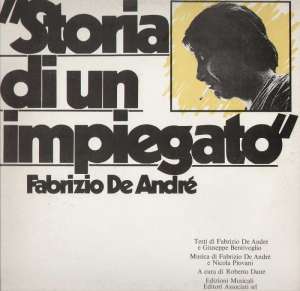 Storia di un impiegato, the sixth studio LP by Fabrizio De André, written with Giuseppe Bentivoglio and Nicola Piovani, came out in 1973. Like other LPs by De André, its nine tracks are linked by a narrative thread, almost like chapters in a novel.

The main character is a thirty-year old clerk, who in 1973 listens to a song about the May 1968 events in France (Canzone di Maggio [May Song] which is loosely based on Chacun de vous est concerné [Everyone of you is involved] by the Parisian anarchist Dominique Grange). The song is a condemnation of the middle-class conformists who, during the street riots, chose to stay at home and wait for the storm to pass. The clerk is deeply shocked, and in the song La bomba in testa [Bomb in my Head] he asks himself how it could be that people just a little younger than himself could choose the risky path of rebellion; however passive, his acceptance of conventions hinders him from endorsing it completely. A thirty-year old man has much more to lose than a twenty-year old one: at thirty, there is no more space for mutual support, but only for an instinctive fear which can lead one to do everything. So the clerk decides that his will be an individual revenge, aimed at freeing himself from the conformist habits of his life. Suddenly, his process of awareness turns into a dream.

The clerk attends a Masked Ball uninvited (Al ballo mascherato [At the Masked Ball]), where all the false myths of the middle-classes are dancing together. Here his ‘democratic’ bomb indiscriminately destroys everyone: Jesus Christ – not the human Christ of De André’s 1970 LP La buona novella [The Good News], but the Christ distorted by centuries of religious hierarchy – who becomes a Nobel prize and a symbol of hypocritical pietism; the Holy Virgin; Dante Alighieri; the ‘Pietà’; the Statue of Liberty; and finally the Father and the Mother (sacred symbols of the middle-class family), and even the friend who taught him the value of rebellion.

Then, before a judge, the clerk learns that he has always been under surveillance, and that his dream-like rebellion has been made possible only because it was useful to the Establishment, which has allowed his struggle to be renewed and preserved. At the end of the dream he identifies himself with his father, the strongest of the symbols he thought he had destroyed; this symbol proves to be unbreakable, like the values it embodies and the frustrations which, from generation to generation, sons receive from their fathers. The clerk refuses such an identification and decides to bring his rebellion outside the dream, to the real word: he begins his attack the Establishment by telling the judge: ‘Your Honour, you are a son of a bitch, I will wake soon and in a sweat; now you wait for me outside my dream and we will meet for real. I want to go back to square one’.

The clerk, who now becomes Il bombarolo [The bomber], chooses his own target: what better place than the Parliament as the symbolic target of his attack. With clear sobriety he throws a bomb against the Establishment, its cronies and its servants; but his bombing ability is great only in his dreams and the bomb simply hits a newsstand. He realises his failure when, among the rubble of the explosion, he catches sight of a newspaper and the image of his dismayed girlfriend who dissociates herself from his senseless action.

Prison, the awareness of his girlfriend’s abandonment, her bargaining for more negligible certainties and his life as an inmate will teach him to be an equal among equals. This will lead him to maturity. As in the Parisian students’ song, now the pronoun ‘we’ has been replaced by ‘I’, and the struggle against the Establishment – which is now embodied by the prison guards – turns from being individualistic and sterile, to collective.

The clerk’s inner growth contains a timeless message: a real change can come only from a commitment to the common good. A lesson which today’s thirty-year olds should learn from the ‘cuccioli del maggio’ [‘May puppies’, i.e. the young people involved in the 1968 rebellion], who even today are fighting ‘così come si gioca’ (‘as if they were playing’).