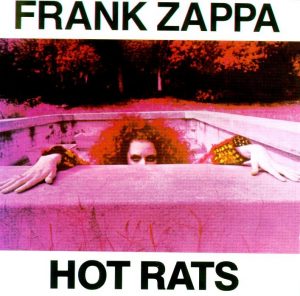 Frank Zappa was his music. Never before had a musician been able to embody his own art so deeply. Frank Zappa ate, drank, dreamed, breathed and lived music. I don’t believe there was a single moment of his existence when Frank Zappa was not thinking of writing the score for his latest intuition, his latest dream, his latest sneer, as proved by the huge amount of his published (and unpublished) material, a quantity of high level records, that other artists wouldn’t be able to produce in ten lifetimes.

What sort of music did Frank Zappa compose and play? In any self-respecting record store, the crazy/brilliant composer from Baltimore wouldn’t be cataloged by genre, he would be given his own exclusive space, as his music cannot be pigeon-holed into preconceived categories: Zappa’s music is not rock, not blues, not jazz, not classical, not symphonic, not folk, not reggae, since he takes and reworks the best of everything, whipping it along with choirs from the fifties, strange background noises, chatters and laughs, polyrhythms, odd tempos signatures, irrational or random rhythms, and various weird contraptions, culminating in unique and unrepeatable compositions. The most apt definition of his work was given by a friend of mine, a lover of jazz, who came with me to the Modena concert in 1988 without ever having heard a single note by Zappa before; at the end of the performance, literally astonished, he exclaimed: “But this is… total music!”

Such a creative portent, as often happens, divides the audience in no uncertain terms into enthusiastic fans and detractors to the bitter end: “you either love or hate him” in Zappa’s case is not a cliché. For this reason, Zappa fans have always been an abnormal and niche tribe among the rock community since the late sixties.

Don’t ask me why, but in the seventies I had a total dislike (unmotivated, I can say today) of American singers and musicians who bore Italian surnames: Frank Zappa fell into the category, therefore I didn’t pay him any attention until 1978, when all of a sudden I decided that the guitarist with whisker and a soul patch could be tested by my authoritative judgment (to be very clear, I’m only joking, the only judgment I can give relies solely on my personal taste, being as I am completely unaware of elements of musical technique). Unfortunately, my first contact point with Zappa’s music, my test case, was an album released in January 1979, more precisely the enigmatic Sleep Dirt. I say unfortunately because Sleep Dirt, together with the previous Studio Tan and the subsequent Orchestral Favorites, was an LP which was not conceived and designed by Frank Zappa. Without permission of the artist, it was “thrown” on the market by the record company Warner Bros who recorded a series of Zappa’s tapes made during previous years and which were intended to be reprocessed and incorporated into a larger project, as was Zappa’s way. On the contrary Sleep Dirt, though containing tracks of excellent quality, was a “poor” product, badly packaged, having a cover without notes, and even without the musicians’ names. In short, a disc predestined to failure. Nevertheless, from that first time listening to his music Frank Zappa has become a kind of obsession with me: for almost thirty-five years I have bought everything that could be bought on LP and CD, video recordings on VHS and DVD, books, newspapers, posters, postcards, concert tickets and more.

If I were asked what, in my opinion, Frank Zappa’s best album is, I’d be in serious difficulty, because there are so many which have given me emotions, joy, ecstasy, consciousness, that I couldn’t draw up a ranking without making mistakes. But if I really couldn’t escape making the choice, reluctantly and suffering in the process, I would choose Hot Rats, as this disc came at a crossroads in Frank Zappa’s artistic career, at the dissolution of the original line-up of the Mothers of Invention and the start of the Master’s solo career. Here Zappa abandons (though not permanently) the crazy rock of the first records to reach a more composite project, bringing his music to jazz rock which in those years was taking its first steps, driven by real giants including Miles Davis, so much so that many consider Hot Rats to be a “son” of the Miles Davis’ masterpiece Bitches Brew, a real “manifesto” of the fusion genre. A small question: could Frank Zappa have wanted to give a direction to his project by just playing in the title on the similarity in sound between jazz and rats (Hot Jazz/Hot Rats)?

In any case, in addition to the only remaining former Mother, talented multi-instrumentalist Ian Underwood, other session musicians from the world of jazz and blues collaborated on the album: Max Bennett and Shuggie Otis on bass, drummers Selico Ron, Paul Humphrey, and John Guerin, the “electric violin” “Sugar Cane” Harris and Jean-Luc Ponty, as well as the voice, in the only sung piece of the disc, Willie the Pimp, of Zappa’s longtime friend and versatile artist Captain Beefheart.
Among the tracks forming this masterpiece, there are true milestones of Zappa’s work: Peaches en Regalia, first and foremost, a modern jazz fusion standard which is also one of Zappa’s best known motifs: the aforementioned Willie the Pimp, a blues rock song in which Sugar Cane Harris’s violin and the Master’s guitar, engaged in fine solos, display their worth, not to mention the hoarse and croaky voice of Don Van Vliet, aka Captain Beefheart, Son of Mr. Green Genes enriched by complex wind instrument scores, acting as a counterpoint to the guitar solos, the beautiful Little Umbrellas, the fiery jam session The Gumbo Variations halfway between jazz and blues, ending with Jean-Luc Ponty’s violin emphasizing the jazz mood of the disc in the final It Must Be a Camel.

One last note about Hot Rats: the disc was recorded on a 16-track multitrack recorder, a cutting-edge device still being experimented with at the time (and who more than a crazy experimenter like Frank Zappa could have used it ahead of its time?), which offered many more possibilities in terms of overdubs than the 4 and 8 track mixers in use at the end of the sixties.
Finally, a necessary explanation: this piece was written only because of my immense passion for the music of the Master. I’m not a music critic, and I generally agree with what Zappa said about the category: “Rock journalism is people who can’t write, interviewing people who can’t talk, for people who can’t read”.