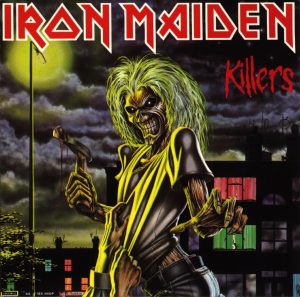 Iron Maiden are like a rite of passage, like the souped up exhaust of a motorcycle, like a cigarette smoked in the school toilets during break or the mystery of that first joint that makes you feel high more because of the idea of it than because of any real effect. Iron Maiden, like no other band, is a cult that is renewed from one micro-generation to the next. For the people who listen to rock they represent a fixed passage. A great part of this effect, still going strong after more than thirty years, is due to the band’s graphic impact, to the genius of British artist Derek Riggs and the band’s managerial decision to make his work a fundamental element of the their marketing: the unchanged font, the same character on all the album covers/t-shirts/patches, even the materialization of the character during live performances of the band.

Eddie, the Iron Maiden mascot, opens the door to a world of music, but he attracts us by appealing to other elements that have nothing to do with music. Eddie is an enigma, he is obscurity, he is like the creep who forces us to spend our teenage nights watching horror movies: getting terrified so as to exorcise our fear.
In the early 80s, my eldest cousin’s room was dominated by a huge poster depicting the cover of Killers. The aura that emanated from it seemed to contain countless possibilities and mysteries, as well as the sense of belonging to an enlightened secret society. To embrace those colours, those sharply shaped letters; to own a poster, a record or a patch, was a question of social status, a way of standing out. It was that particular thing that, in your pre-adolescent fug, can tell you who you are better than any other human being you interact with.
And what about the music? Well, when imagination meets musical notes, Iron Maiden’s music, a mix of the epic, melodic, technique and mystery, is simply a bomb. A bomb that explodes and lodges under your skin. A smart bomb that releases salutary effects even many years later. Iron Maiden are like your first crush: emotion without preconceptions, only innocence and involvement without fear. The indisputable golden age of their prolific career was from 1980 to 1988, producing an enviable series of seven studio albums and an unforgettable live album, each one indispensable in its own way. Even though their absolute masterpiece is probably The Number of the Beast (1982), Killers, recorded one year earlier, captures that magical moment when innocence imperceptibly slips away, allowing a glimpse of what we have been and what we will become.
Killers was recorded when the group’s settled period (three fifths of which is considered their classic period, from 1983 to 1988). It is the second and last album recorded with Paul Di Anna’s voice. Less pompous and lyrical than his successor Bruce Dickinson, Paul is rightly considered incomparable by his first fans. His aptitude made Iron Maiden a group of fascinating unfussy speed rock and, unlike many of their contemporaries, allowed them to create ground-breaking and vigorous songs. In this sense, vocal range and perfect pitch did not matter very much: Iron Maiden were an unrestrainable military machine, able to attack (assail) the listener without falling into the cliché typical of the heavy metal of the 80s; it was as if these five London boys took the hurry and focus on spontaneity of the punk they were escaping from and developed their intricate ideas as directly as possible.
The initial trio of tracks works powerfully well: The Ides of March, rhythmic and instrumental, with its march rhythm, paves the way for the base riff that makes the super classic Wrathchild take off, a real concentration of what Iron Maiden are and will be. Hammering sounds, twin guitars exchanging solos, easy refrains to be bawled at the top of your voice: 2 minutes and 52 historical seconds. Murder in the Rue Morgue starts out calm and then bursts into speed and syncopated chord changes, creating an infectious dynamic that leads up to the refrain, counterpointed by guitar motifs and vocal melody. After these three it is difficult not to be drawn into listening to the next songs on the album: Another Life (somehow similar to Motorhead’s music) and Genghis Khan, another instrumental piece in which Maiden’s technique is uncompromisingly blasted out. Innocent Exile can hold its head high and Killers is another instant-classic with all the elements of Maiden’s sound.
After Prodigal Son, which I personally find pretty forgettable, the record ends with Purgatory and Drifter that don’t modify what the record is as a whole: solid, quick and spontaneous. The next year, when Bruce Dickinson joined the band, Iron Maiden would change tack and exponentially increase the success achieved by their two first albums, therefore becoming the standard-bearer of the genre, then as now. The relationship they have with each one of their millions of fans is a private story. Mine is one of first love, the one you never forget, the one that, from time to time, makes you look at the pictures again and think about “The way we were”, the one that started on a Christmas evening, exchanging shy glances with the three-quarter pose of a character in a poster with a hatchet in his hand, under a classic leaden London sky. That is how my life changed and, thanks to the Maiden, has never been the same since.