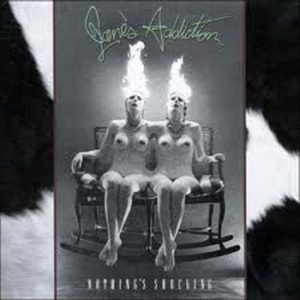 The city is so much in its moment of perfection, so enamoured of its own reflection and of a slow succession of dawns and sunsets that it is like a drunken king at a raucous orgy, who does not realise that his castle is under siege. The bad seeds which will sweep away Los Angeles from Los Angeles are in the air, and take root a bit further south of the Strip, beyond the Ciniega restaurants and the tidy octagonal maze of La Brea; where downtown L.A. becomes tangible, Hancock Park overlooks the suburb of Wilton, and addiction is not simply a recreational hobby, but a cursed way of life.

Eric Avery (bassist, twenty-two years old, in rehabilitation for six years), Perry Farrell (singer, dreamer, author, twenty-eight years spent on the brink of the dark side), Dave Navarro (twenty years old, always hugging his Gibson Les Paul; but his true lover, the only thing which can fill the void of a brutally murdered mother, is heroin) and Stephen Perkins (twenty years old, talented drummer, the only clean one in the band) hang out in a big early eighteenth-century house, a hub of freaks, artists, junkies. Talents.

Warner Bros had just signed them, beating the competition from the other majors in a bidding war which brought a record-breaking $300,000 advance to the band. The L.A. Weekly, the most authoritative ‘street’ journal in the city, defined them as the ‘Best Underground Band’ and ‘Best Hard Rock Band’ of the year; without there even being any vinyl in circulation to prove it.

Another big Rock’n’Roll fraud? Another fleeting L.A.-style media showcase? No, not this time. Not according to the stage. On stage, the ultimate altar of music making, where nothing counts but the show, where sweat is a stigmata of truth, where ‘exhibiting the family jewels’ is much more than a strong metaphor and where psychosis, heroin and art give way to expressiveness, Jane’s Addiction are the most beautiful ‘thing’ in the Los Angeles of the time: they are the Los Angeles of the future.

This promising outlook is counterbalanced though by the breakdown of the relationships between the members of the band, worn out by an addiction in which attempts at keeping clean and dire relapses, egos, jealousy, and fights over sharing royalties are a daily Sword of Damocles ready to prematurely ruin the party.

Perry Farrell’s vision and transversal artistic talent are the only glue which proves able to drag four artistic sensibilities beyond both personal barriers and drug addiction, towards a common goal: Nothing’s Shocking.

The first album of the Nineties is published on 23 August 1988, after a stormy four-month collaboration with the producer Dave Jerden. The choice of Jerden (imposed by Warner Bros in the light of his previous work with Brian Eno) was an unconventional one, but it proved fundamental in (successfully) pushing the band’s sound beyond the clichés of the time, creating a bewildering fusion of Seventies hard rock, funk, instrumental virtuosity (Navarro/Perkins) and echoes of the post-punk/goth scene which made L.A. shine in the early Eighties (Farrel/Avery).

Jerden leaves his mark and Nothing’s Shocking sounds like nothing else at that time. Perkin’s drums are reminiscent of a steroid-fuelled Talking Heads beat, Avery’s bass leads the groove and claims for the four strings a role almost forgotten by the rock music of the time, Navarro’s guitar throws out incisive riffs, sharp rhythmic patterns and generous solos in outpourings of echo and reverb, Farrell’s voice reaches unparalleled levels of personality and eclecticism and pronounces real words.

With its eleven tracks, Nothing’s Shocking pleases everyone: the heavy rocker, the punker, the ‘arty’ scene, obscure goth taste, the past and the future, the Strip and Downtown L.A.

As with any properly pivotal album, Nothing’s Shocking at first turns out to be almost a commercial failure, with only 250.000 copies sold in the U.S. in its first year (it will then go on to sell more than one million, and go platinum).

A cover showing two nude female Siamese twins with burning heads does not help; indeed, neither does a fragment of the same peeping out from the psychedelic delirium of the video clip of Mountain Song; elements which contributed to distancing the band from the big distributing companies and from MTV.

This sense of artistic integrity, however, shows the coherence and autonomy of the band, despite personal tribulations and inner rifts, sowing the seeds which will generate Alternative Nation in the Nineties.

The two decades differ in one main respect: independence. Nothing’s Shocking’s most important legacy does not concern the masses but single individuals, single artistic consciences and self-perceptions as musicians at the beginning of the new decade. There are countless statements of absolute respect, from almost all the bands and musicians who will leave an unforgettable mark in the following twenty years: Pearl Jam, Nine Inch Nails, Red Hot Chili Peppers, Marilyn Manson, to name just a few.

Jane’s Addiction do not achieve the heights of fame reached by these bands: their story (even in their very name) speaks of dependence, of an inability to survive themselves, of a destiny of self-destruction which (even in nature) is a moment of transition towards new forms, times, languages.

Jane’s Addiction’s golden period (they are still active) peters out after a few years, after another album (Ritual de lo Habitual) much praised by the public, and their first break up, which came in the wake of interpersonal and psychophysical destructiveness. To say goodbye, to sing their swansong right across America, Perry Farrell turns the band’s farewell tour into an itinerant feast: the first edition of the Lollapalooza Festival.

For two days the shelves of half the record shops in the world have been carrying a record with a curious cover. An infant is holding his breath under water and swimming after a one dollar note attached to a fish hook like a lure. In a few months, the latest big revolution of the music industry will take place. Another story is beginning.