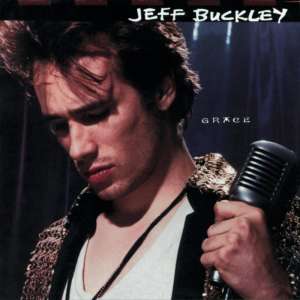 First work, poetic declaration and testament at the same time as one of the greatest artists of all time, who died prematurely at the age of 30: Jeff Buckley.
Grace is a synthesis of ratings, influences, contributions. Embodiment of life in its variation of opposing elements: birth and death, love and disillusionment, shining joy and dark anguish. It is hard to think what else Jeff Buckley could have given us if, on that cursed May 29th 1997, a tributary of the Mississippi had not taken him away.
In this album he gave us all his soul, as if he were aware of his premature death – a fate shared together with his father,  the singer-songwriter Tim Buckley, who abandoned him even before he was born and died of an overdose when he was only 9 years and one month old.
It was released in 1994 with 10 tracks and in the following publications another song – Forget her – was added. In this album it is important to underline the fundamental contribution of other artists, starting with the first two songs which combine the compositional genius of guitarist Garry Lucas with the poetic plot of Jeff Buckley. His suggested images fluctuate between dreams and reality.

In Mojo Pin love becomes one with addiction. The music is played in a crescendo:  a delicate arpeggio develops from an intro of harmonics and culminates in an incisive procession of chords that resolves in Buckley’s heartbreaking, but at the same time angelic, scream.
However, the most significant aspect of this album is definitely the title track. The words sound dramatically ominous in the light of the facts, like an omen of death, of which Jeff, however, is not afraid, or pretends not to be afraid of to exorcise it. The authentic pain is exclusively the earthly one, as it seems to reaffirm in the magnetic and anguished refrain Wait in the fire, even more disturbing when the obsessive ticking arrives not giving time. Here too the protagonist is a quick arpeggio, which guides the song in a less shy way than the previous one, entering in medias res, and then being supported by a solid bass line and the incisive drums.

The following Last Goodbye signed uniquely by Buckley, as Lover, You Should’ve Come Over, Eternal Life and the additional track Forget Her, is a melancholy but rhythmic ballad that gives voice to the awareness of a finished love.
Lilac Wine is the first of  three covers. It was written by James Shelton in 1950 and re-proposed by numerous artists, including Nina Simone. In its aphrodisiac calmness, musically essential, it contrasts with the subsequent So Real, by Buckley and Michael Tighe, guitarist and last member to join the band, which was formed only a year before the record debut. In this song a poignant distortion amplifies Buckley’s painful lament, which rises, unmistakably crystal clear, to scream the tormented memory of the sweet moments of the past, so tangible as to be a daydream to be sucked into.

One of the most significant interpretations of in music history follows: Leonard Cohen’s Hallelujah. Here all the nuances and the incredible extension of his voice emerge, which would result in a mere technical exercise if it were not for his extraordinary ability to touch the innermost strings of the soul and move us as if that exclamation was addressed directly to us.

Lover, You Should’ve Come Over is a very sweet poem, containing two of the verses I’ve felt very close to since my first listening: Too young to hold on / And too old to just break free and run.
Corpus Christi Carol is the third cover; composed by Benjamin Britten, it once again enhances Buckley’s voice, especially in the high registers, in a song with a liturgical tone.

It has an aggressive arrival, in contrast to the ethereal previous track, Eternal Life, one of the most rock and most influenced by the contemporary grunge movement, which in that year lost its most worshiped spokesman, Kurt Cobain. Once again the theme is death, and the meaning of life in opposition to it. Pushing the rhythm of the questions: What is love? Where is happiness? What is life? Where is peace?

All the band’s ideas come together for the first time in Dream Brother:  namely, the ones of Mick Grondahl, the bass player, and those of Matt Johnson, the drummer.  The two of them started playing in perfect synchrony in no time.  In that song, exceptionally gloomy and with oriental vibes, Buckley’s painful waiting for a father who would never come nor answer arises.  However, the text goes on with a mild admiration and sympathy towards that parent, who died at 27 years old after a long suffering.
Forget Her is the last song of the album, perhaps as a bonus track and despite his own composer’s will: a ballad in search of solace after the end of a love story, whose sorrowful fate was already written by the premises; although, it’s hard to forget about it.

Grace is definitely one of my favorite albums. As (no other than) David Bowie said, it’s a must to take with you in case you end up on a desert island.
I left a part of me in that first listening and sometimes I feel the need to return and take it back.
But it’s above all a CD I give as a present or share with those I love the most: it’s like donating a part of myself.