Home Reviews Those amazing records! King Crimson – In the Court of the Crimson King 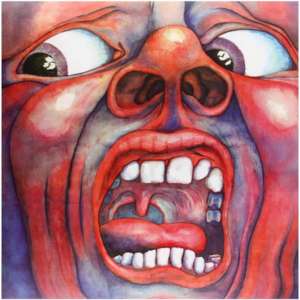 I still remember the first listening: an immense emotion overwhelmed me, taking me into another dimension.
I had borrowed the CD of In the Court of the Crimson King from the town library, after reading the name of the band, unknown to me at that time, in a book. The feeling of having a mysterious casket in my hands had already made its way from the cover, so enigmatic to reawaken atavistic fears, and once opened, what came out from it was certainly something inconceivable for me.

Neither the title of the album nor the name of the band appears on the cover, at that time still at the beginning. Only two colours: the primary red and blue, to give shape to a face more iconic than ever, the work of Barry Godber, who died a few months after the release of the album at only 24 years old. That face fills the cover frame anxiously, in a silent scream of horror, maybe looking at the unknown, at the future (on our right in the spatial representation of time) or in an act of self-exploration. On the back, in fact, we find the continuation of the face, which seems to melt in the universe, perhaps in that of the human mind itself. The protagonist of the cover is recognised as The 21st Century Schizoid Man, which is presented to us in the opening track, while the persuasive figure inside the gatefold cover would be the Crimson King, who invites us with one hand to follow him inside his own court, while with the other he indicates that he is speaking or blessing us, according to the iconographic convention.

In the Court of the Crimson King was published in 1969, the absolute golden year of music, completely revolutionary in sound and the first result in focus of a genre, Progressive Rock, which was taking shape exactly in those years. A product of its time, it casts a disillusioned look and a harsh complaint against the Vietnam War and the consumerism model promoted by the United States.

The album is made up of just five tracks, but their duration is definitely different from pop style, since each song is longer than six minutes. Whose totality has the proper wholeness of concept albums, you can experience three emotional climaxes , wisely compensated by the two harmonious ballads I Talk to the Wind and Moonchild, which get a breather by spacing out three sound cathedrals such as 21st Century Schizoid Man, Epitaph and the conclusive The Court of the Crimson King while listening to it.
That’s a play of exceptional complicity made by the instruments, that move among virtuosities that are anything but aseptic, in a deeply moving dialogue. The quartet composed of Robert Fripp (guitars), Ian McDonald (flute, saxophone, clarinet, vibraphone, keyboard, piano, organ, mellotron and chorus), Greg Lake (bass and main voice) and Michael Giles (drums, percussions and chorus) express themselves by exploiting the whole spectrum of musical dynamics, from the sharp sound of the sax and the distorted voice in 21st Century Schizoid Man to the whisper in Moonchild, soft as a flame about to be blown out, till the majestic, epic ending, that invites us to join the cortège reaching King Crimson.

It is an intrinsically sullen album, dealing with existential anguish, and death; but at the same time, it brings back a sense of peace, harmony and perfection that don’t instil terror at all, they even seem to inspire us to peacefully embrace our end, as an insect that can’t help moving closer and closer to the light, even though it’s fatal to it. It’s a cathartic listening, perfectly suitable for this dark and apocalyptic period, as the King Crimson themselves had predicted.

In the Court of the Crimson King unconsciously became the mask of my anguishes and fears about the future. It accompanied me in such the leap of faith like the end of school, when all the hated but certain paths that are traced by adults end; that moment in which they fully become agents of their own destiny, with all the advantages and disadvantages.

Translation by Alessandra Botti and Anna Pangrazio, edited by Jenovia Amisti Smith
Alessandra Botti and Anna Pangrazio are students of the Linguistic Sciences and Foreign Letters faculty at the Catholic University of the Sacred Heart in Brescia, Italy; they collaborate with Inkroci in the translation project coordinated by Professor Jenovia Amisti Smith.