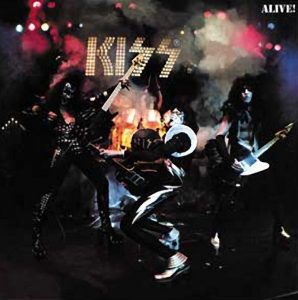 If only I could be one of the Kiss.
Not any Kiss. The here and now Kiss! Tonight’s Kiss, in Detroit.
This black city, black as the skin of its people, as the exhaustion gases of the cars it makes.
Black as this oil crisis, so black that if I think about the future, I could bet that the future does not exist. Black as Motown’s groove, which can move to Los Angles, to New York or to the moon, but which will always be a Detroit matter, the motor city, the mo(tor)town!

It’s as black as the star of Paul Stanley, black as the world outside Cobo Hall, this modern Pantheon that tonight lives only on bright colours.
They say we’re twelve hundreds, maybe more. I lose myself while looking up at the bleachers and the ordered rows of seats. They’re organised in square sections, surrounded by the exit routes. I start counting the seats in every section, but when I come to seventy-seven, I lose count. My neck aches from too much looking up. If only I could be one of the Kiss.
I wouldn’t just stand here holding a placard. I spent a couple for afternoons painting it, after school, instead of doing my homework. Fuck the homework. Homework is no use in Detroit.
I know the Kiss make-up so well that I could paint it with my eyes closed. Black and red markers and some silver cello tape: it’s a piece of cake.
I raise my right fist when a guy takes some pictures. He’s got a bunch of passes bound together with a lace hanging from the shoulder bag of his Reflex camera. There may be twenty, thirty, fifty of them.
Maybe he’s somebody important.
Maybe tomorrow I’ll end up on the Free Press or on the News. It would be a nice job! I would automatically become the no. 1 Kiss fan of the school. I could get a snog or maybe something more out of it. Talking about pussies, there’s this girl on my left, with a slightly olive complexion framed by the black glowing of her straight hair. Top-class stuff. She‘s paired up with the surly gaze of a guy who is so angry-looking that I am afraid even to glance at him. If only I could be one of the Kiss, a wave would be enough, and he wouldn’t even be the shadow of a problem.
If only I could be one of the Kiss, here and now, I would be Ace Frehley.
The Spaceman, the tough one, the one on the loose. The Ace bowed on a Les Paul Custom with three pick-ups, the free agent, the bragger, the most adored guitar in America. I would be backstage, not giving a shit about the guests, the photographers, the TV, the gate crashers, the city authorities and their embarrassment for being out of place, the smart groupies and the inattentive wives. I wouldn’t give a shit about anything but my make-up and my cold gin, in front of a whole-length mirror, one of those mirrors with round lamps all around the edges. One of those mirrors which I can picture in a Broadway backstage. I would stand there trying out my faces, my smirks, my Ace Frehley style moves, I would adjust my crotch to enhance its virility and right after that I would wink my eye feigning an effeminate kiss. I would rock in my stomach an alcove where to grow my adrenaline, I would destroy a mute radiator made of not-amplified nickel and mahogany, and then I’d have another cold gin, look at myself in the magic mirror again and display more nervous looks until the noise of the crown would become insistent like a clock.
If only I could be one of the Kiss. At this instant I’d like to think that nothing would change. Lights go down and leave the altar to the customary phrase You wanted the best, you got it! The hottest band in the land: KISS. Cobo Hall explodes. The thrill I feel is not different from that hitting Paul, Ace, Gene and Peter. It‘s a collective shock. It’s an imaginary magnet put in between the stage and the first row. We’re a stretched crowd, shaken, dragged, pushed towards the stage. They’re like an incarnate comic, four superheroes armed with attitude. We never touch each other, but there, in the middle of it, we feel each other and belong to each other. The shouts, the lights, the fires, the watts: they’re all elements of a ritual.
We all are show, we all are the audience; we all are the Kiss.