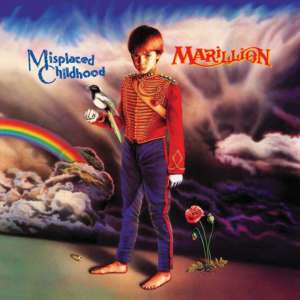 “And the man in the mirror has sad eyes”: Marillion and the jester’s farewell

It was the middle of 1985 when Europe noticed a British group that till then had been known mainly in the British neo-progressive scene, with some sporadic appearances in Northern Europe; Marillion (initially the band’s name was Silmarillion) have two relatively successful albums for the musical genre, a handful of faithful followers of their live performances, characterized by the scenic presence of the histrionic and giant Fish, the band’s Scottish singer under their belt, but they are still considered nothing more than a blurred and insignificant copy of Genesis by critics and the general public.

Misplaced Childhood was born during a “journey” with LSD in which Fish imagined the story and the words of what will be the band’s first concept album, able to assert itself when pop and new wave raged (Duran Duran and Spandau Ballett were the most popular bands) with two singles that still represent two of the biggest commercial hits in the progressive range, Kayleigh and Lavender.
The album completes a trilogy together with the two previous albums, Script for a Jester’s Tear (1983) and Fugazi (1984), with which it shares the full-bodied sound typical of symphonic rock and prog, complex lyrics full of meaning and chameleonic, very high level singing performances by Fish.
The three albums are also connected on a graphic level: covers full of details and cross-references, with the jester, omnipresent even in live shows, but this time he says goodbye coming out of a window (on the back cover) and he will never appear again in the band’s history.

The record was born as two long suites which have been then fragmented into ten tracks due to some decisions by the record company. These ten tracks are however joined together on both sides of the record, without interruption; their record is therefore characterized by a continuity that is not only musical but also lyrical, as it must be a real concept album.
The lyrics talk about love, friendships, disappointments, alienation (which will be deepened in the next album), trips, all seen with the eyes of childhood which fades away, but they are also full of double entendres and enigmatic sentences: never as in this case is it recommended to have the lyrics booklet at hand while you are listening to their songs.
The Music, on the other hand, is a perfect mix between the classic progressive atmospheres and the more pop vein that allowed the album to break through the charts. It welcomes us with a captivating sound of keyboards and a gloomy atmosphere, underlined by the tone of the vocal, catapulting us into the protagonist’s melancholy dreams. The keyboards are the dominant instrument in the entire album, and they create a musical foundation, solidly supported by the rhythm section, on which more calibrated guitar parts than the previous works and the impeccable singing fit together.

On the first page, the two singles Kaylegh and Lavender stand out, the two least prog pieces of the album: two real pop ballads (the classics “less than three minutes” for the radios), although with symphonic musical inserts. Above all Kaylegh is a single that has had great diffusion for years, and even today it is not difficult to pick it up on some radio stations.

The second page starts with two very rhythmical songs that separate from the atmosphere of the first part and then leave space to the three best episodes of the album: the wonderful small suite Blind Curve, full of sounds that refer to Pink Floyd and Genesis and certainly a manifest piece of the neo-progressive rock, followed by Childhoods end?, a song that takes it upon itself to bring the theme of the concept to a conclusion.
The record ends with White Feather, a song in which Fish can angrily express their anti-militarism (the white feather was given to those who were accused of cowardice in the British army) and his criticism to the society and politicians that fuel the conflicts.

It is not a coincidence that, going back to rereading the texts of the previous songs, you can find further meanings, even a social ones, as it is right to happen when you are in front of a high-level artistic work.
And Misplaced Childhood certainly it is: it is not risky to call it one of the best and most important records of its decade, not only in the field of the progressive music. Certainly, for the Marillion it still represents, thirty-five years later, the greatest success and the record for which they are remembered, although they produced many and even excellent ones later.

But after that everything changed for them: they became much more famous and influential, but the jester was already gone and Fish would have time to write and publish an album again with the group (Clutching at straws, 1987, almost at the same level as this one) before slamming the door and leaving, in a Roger Waters style. A big loss for the group but also for the singer, who even with good albums would not be able to repeat the uniqueness of this work.

Translation by Francesca Crea and Alice Gazzaroli, edited by Jenovia Amisti Smith
Francesca Crea and Alice Gazzaroli are students of the Linguistic Sciences and Foreign Letters faculty at the Catholic University of the Sacred Heart in Brescia, Italy; they collaborate with Inkroci in the translation project coordinated by Professor Jenovia Amisti Smith.