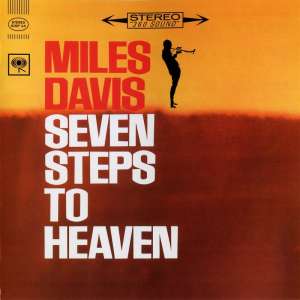 New York. Someone is playing jazz standards in a club. Two lovers are having a sweet slow dance immersed in a timeless cloud of smoke. The notes of Basin street blues open Seven steps to heaven, Miles Davis’ eighth album, and this image appears in my mind. All of a sudden, the piano solo and the unpredicted sparkle of the ride cymbal transform the scene: a wide road in the middle of the emptiness of the American country, illuminated by the full light of noon. A red car is dead set while crossing it . The couple on board’s hairs are pleasantly fluttered by the gentle wind. But it is just a moment: in a second Miles Davis’ trumpet brings us back to the dark club. There is nobody left and the musicians are leaving the stage. What already seems the end is just the beginning.

And what a start! Seven steps to heaven, the title-track, is what follows. It is this album’s pesarl and one of most musical and enjoyable fast-tempos of the entire jazz repertoire. Maybe, my opinion is biased. Indeed, it has been the first jazz tune to really excite me. A nervous and dry song, with fresh notes and bright colours.
The album Seven steps to heaven communicates by images; a painting of sounds, at times sweet, at times hysterical, like Miles Davis’ trumpet. Comparing the two versions of So near, so far that we find in the 2005 re-edition is really interesting. The only recording available in the original album features two musical geniuses such as Herbie Hancock and Tony Williams, at the piano and at the drums, respectively, and has a large and relaxed breath. Here, on the theme, the trumpet of Davis and the saxophone of George Coleman follow one the other and overlap gracefully, like children playing tig On the other hand, in the version added in the album re-edition, the piano of Victor Feldman and the drums of Frank Butler have a sharp and muscular look. It is a matter of personal taste, but I love the playfulness of the Hancock-Williams’s version, and I prefer it to the seriousness of the Feldman-Butler’s version. I mean… C’mon, let’s play!
But, let’s go back to the 1963 record. In I fall in love too easily words are not needed; a trumpet is enough to express all the bittersweet resignation of a heart that finds itself beating for a new person too often. Love, a tumultuous and uncontrollable feeling that Miles Davis knew very well.
The theme of the sleepy Baby won’t you please come home, similar to a mournful monotonous tune, creates a strong contrast with the next track, Joshua. It is a song composed by Feldman, but played by Hancock, in which the entire band plays really hard. Ron Carter’s performance is particularly remarkable. His hypnotic double-bass line is jaw-dropping.
Throughout the entire record, Feldman and Hancock, Butler and Williams, alternate themselves at the piano and at the drums. And it is just after this album that the magic quintet Davis – Shorter – Hancock – Carter – Williams will take shape. This band will create a number of great records, that will embody the evolution of the Miles Davis’ musical style. The highest peak will be the 1970 avant-garde Bitches brew, his first work with a different band that will be the forerunner of the fusion style of ingenious bands like Weather Report and Return to Forever.
Miles Davis’ Seven steps to heaven is the phonographic acknowledgement of his first meeting with Herbie Hancock and Tony Willams. Quick handshakes and a few “nice to meet you”. We can now say, 53 years later, that the pleasure is all ours.