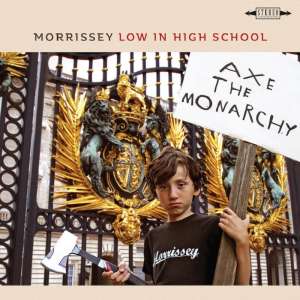 Names such as the Smiths and Morrissey, may say little or nothing to today’s listeners, but they are very meaningful to the 80s’ rock history.
I have recently been to London and while I was walking through Notting Hill, I could not help but notice a small shop selling t-shirts dedicated to all the rock legends..I was intrigued by it, went in and started browsing around looking for an interesting and original London souvenir to take back to Italy with me. Obviously, the Beatles and the Rolling Stones were the most popular, as well as those bands which recently broke up such as Oasis and Blur, the amazing Gorillaz, the Chemical Brothers, Portishead … But, honestly, what I was looking for was one thing: a Smiths or Morrissey t-shirt.

I approached the shop assistant, asked her whether they had any in stock but she stared at me as if I had asked for the most absurd thing a human being could ever want. Appearing a bit lost for a few moments, she looked around, stared at me and candidly said: “Sorry, never heard of them”.

How was that possible? In the 80s, while Duran Duran and Spandau Ballet competed against each other with the most amazing backcombed hair and heavy make-up there was another part of the music scene that was raging against the establishment: I’m talking about the Sex Pistols, the Clash and, indeed, the Smiths, with their charismatic leader Steven Patrick Morrissey.

Today I want to forget about his past with the Smiths (maybe I’ll talk about it in another article) and talk about him, a true icon that has survived unscathed from the 80s until today, always enjoying enormous success with the public; the same public that moves in crowds as soon as he lands in Italy for a concert. Suffice it to say that, in 2007, the Daily Telegraph included him in the top 100 living geniuses!

Morrissey’s latest album was released in November 2017 and is titled Low in High School. In this record and at this point in his career, Morrissey decided to release a number of tracks having a certain disregard for his most loyal fans: it is clear from his choice he won’t follow the constant requests of the public to return musically to the glories and loveliness of the beginnings of his solo career  – on the contrary, after the divorce with Alain Whyte, his style is even more burdened and weighed, as if the author wants to transfer the political and social confusion into music that, in fact, is the cornerstone of his latest work.

The political provocation remains pivotal: how can one forget when, in his first album (Viva Hate, 1988) he recorded the song Margaret On The Guillotine, where he screamed all his hatred towards Margaret Thatcher, or when in We’ll Let You Know (from the album Your Arsenal, 1992) called George Bush a criminal? Let’s not forget The Queen is dead (Smiths’ album and song, 1986): the title is enough to explain anything.

In Low in High School we find songs about anti-Islam candidate Anne Marie Waters and positive statements about nationalists such as Marine Le Pen and Nigel Farage. The notes of My Love, I’d Do Anything For You fill the emptiness that follows these thoughts: all the ideological arguments are pleasantly set aside, and the exuberance of the mighty glam-hard-symphonic rock (I dare make a comparison with Meat Loaf) leaves no doubt: Low In High School is an irrelevant and ambiguous record, in which each track offers a double reading: a pleasant one and a disturbing one. It is also one Morrissey’s album which is full of potential singles, starting from the delightful Jacky’s Only Happy When She’s Up On The Stage, which includes, as well as an ironic and successful text, a trumpet solo.

The single Spent The Day In Bed is not just one of the most melodically affable songs of the last few years but, in the context of the album, it sounds even more incisive, thanks to the same lightness of I Wish You Lonely, a song that anticipates the peculiar tone of the whole work, that delicious sound of Roxy Music style keyboards that, together with the more intense use of the orchestra and the wind instruments, is the real novelty of this project.

Low In High School is a two-sided record: it is clear from the separation between the two sides: with the delicate and nocturnal duet between piano and voice of In Your Lap one enters a more twilight, almost nocturnal, sometimes exotic mood, with atmospheres that sometimes remind us of some of Marc Almond’s stuff from the Marc and The Mambas era, like the flamenco touch of The Girl From Tel-Aviv Who Would Not Kneel.

From this attempt at regeneration some interesting lyrical insights are born, such as the adorable All The Young People Must Fall In Love, an acoustic ballad in the lines of Give Peace A Chance that shatters the serious tone opening the doors to the other album’s little melodic delight, the When You Open Your Legs tango, emphasized with intelligence and taste by the orchestra and winds.

The fans may find this the hardest LP to digest in Steven Patrick’s discography, but it is certainly richer than the previous synergy between music and lyrics, a feature that in works like Kill Uncle (1991) or in the recent World Peace is None of your business (2014) was completely missing. Like it or not, this creeping reactionary drift must be watched carefully and without unnecessary sarcasm, and perhaps Low In High School contains more than one key to reading our turbulent ideological present.