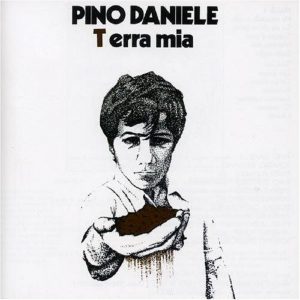 We miss Pino Daniele’s music. Terra mia (My homeland) is a collage of old memories, some of them happy, some bitter, but nevertheless fascinating precisely for that reason. Sounds and tastes of a land which is not the same anymore. What happened to the tarantella[1]? And to the other music from the old days? Is traditional music really just folk and funny?

Pino Daniele would always put a bit of tarantella in his records. Terra mia has a lot of it. In Che calore (How warm), it is central element of thoughtlessness, which makes you genuinely smile. It is a lot of fun. In two parts of the song, Daniele also plays with his voice, giving it kind of a muted sound, similar to that of a kazoo. The contrast with the next song, the short and passionate Chi po dicere (Who can say), is rather intense. Ammore, ammore, ammore (love, love, love): Daniele’s voice sweetly vibrates at the end of the song, lingering longer on the last note. It is the pleasant sensation of the warmth of a blanket, after a hectic day; just like a tarantella dance, indeed.

The album starts almost magically. The sweet sound of the oboe on the piano’s bright chords and the guitar and mandolin’s nervous harmony introduce the singing and leave it to take over. Napule è mille culure, Napule è mille paure (Naples is a thousand colours, Naples is a thousand fears). Napule è is a poem, the poem which is Naples; Naples which is like life: colours and fears.

And in nowadays life, “stomach aches” are the same of yesterday. Terra mia was released in 1977, however the issue of ‘Na tazzulella ‘e cafè (A cup of coffee) is still current. A tazzulella leads to another, and forty years pass quickly; but here we are again, among injustices and corruption, among old mbruoglie (trickeries) and cose ‘e pazze (crazy things).

Daniele uses words and language of his own land. Exact meanings which English or even Italian translation would betray. Maronna mia (Holy Mary) is the black funk which blends with the Rino Gaetano’s hubbub: it is the story of a theft by some guaglioncello (boy); but above all, it is an idiom which produces precise images in the listener’s mind. Neapolitan dialect – si ll’ancappo saje che succede, nce faccio ’o mazzo tanto, è gente ‘e niente, Daniele sings – and the other languages encompass the finest details of the world’s beauty. Oi, maronna mia! – you would think – is this an album review or a linguistic dissertation? A bit of both, actually.

Ce sta chi ce penza (There are those who think) is a party of distant languages, counterpointed by a multitude of sounds and voices, with mandolins at full blast and double bass in walking bass. The chaos of the market in the Sanità district blends with the Afro-American swing, a recent influence on Pino Daniele’s music. Naples is great Mediterranean port, the tie between north and south of the world. The sounds of this cultural mix come to life in songs such as Fortunato (Lucky), Terra mia – which gives the title to the album – and Saglie, saglie (Climb up, climb up). But Daniele’s talent is the capacity to put his own story and homeland into contemporaneity, like in Suonno d’ajere (Yesterday’s dream) and Libertà (Freedom), influenced by British rock; as in Cammina, cammina (Walk, walk) which is partly a waltz and partly a ballad, with elements of a lullaby and jazz; as in ‘O padrone (The master) in which Dylan and Springsteen echo.

My first close meeting with Pino Daniele – inattentively ever-present in my life’s musical background – was Pigro’s videoclip. It was 2004. Pigro (Lazy) is a fine bossa[2], to which the adolescent who I was then was passively listening in rotation on TV’s music channels, feeling a bit annoyed. After a few years, by now a young man and American groove fanatic, I lost my mind for the rearrangements of A me me piace ‘o blues (I like blues) and Che Dio ti benedica (God bless you), listed in Daniele’s best-of album Yes I know my way. In 2012 I went to his concert in Milan, at the Arcimboldi Theatre.

Daniele’s extraordinary ability to blend new and old, America and Naples, Western and Eastern sounds eventually caught me. By doing this, Daniele wasn’t neither funny nor folk, neither old nor parochial. On the contrary, he has always had great international success thanks to the deep knowledge of his own origins which he elegantly used to show, instead of being ashamed and hiding them.

We miss Terra Mia’s music. We miss Italian music too.

[1] A group of various folk dances characterized by a fast upbeat tempo, accompanied by tambourines. It is among the most recognized forms of traditional southern Italian music. The specific dance-name varies with every region, for instance tammurriata in Campania, pizzica in the Salento region, Sonu a ballu in Calabria.

[2] A style of popular Brazilian music derived from the samba but with more melodic and harmonic complexity and less emphasis on percussion.