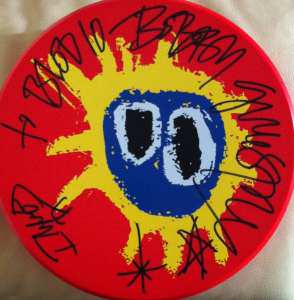 For ten years, I’ve never been able to make up my mind if I’m a punk rocker
or a soul boy, so why not be both? (Andrew Innes – Primal Scream)

1989.
A van is speeding southwards somewhere in the Midlands.
The loud clatter of its drive almost seems to want to exorcise the lands and the monolithic shapes of a long gone industrial glory. It’s too silent and dark all around. Better speed up. Better keep going up to the London lights, to their bustle, to their ability to return a plausible hypothesis of a present and a future to the retina. Inside the van it smells like that mix of mold, smoke and sweat which only who spent their youth tormenting musical instruments in moist rehearsal rooms can stand. Andrew Innes is at the wheel, on his left Bobby Gillespie is wrapped in his thinness. The other members of the band are on the back seats: Robert Young, Henry Olsen, Phillip Tomanov. The Primal Scream of 1989. A blurry and apparently unimportant snap-shot of a rock’n’roll cliche that is attached to this job: one gets few emotional rewards and even fewer financial ones.

The band is touring to present their new album Primal Scream, a breakthrough with a hi-energy rock’n’roll sound in MC5’s style, after the psychedelic indie pop tone at the beginning of their career. Neither the influential British press not the audience seem to be interested in it. They have just performed in Hull City or Leeds or Stoke on Trent. It does not matter where: the important thing is to perform anywhere, pack everything quickly and go back to London. The clubbing scene in the capital is too lively to afford to waste a night in a Midlands’ dive. It is better to spend a few hours driving straight up to the Shoom, the Gossip or the Heaven, where a bunch of DJs (Paul Oakenfold, Alex Paterson, Danny Rampling e and Andrew Weatherall) is literally turning upside down the concept of dancing: Chicago and Detroit acid house rules the dance floor. A new drug is also putting everyone in agreement in hallways and toilets: it’s MDMA. It is not just the consecration of a musical trend, but the assertion (that would become planetary shortly thereafter) of a real subculture. That had not happened since the days of punk.

Screamadelica is all about this, more specifically with the vocalization overwhelmed by beat and echoes of dub at the 4:07th minute of Don’t Fight it, Feel it: Rama lama lama fa fa fa, I’m gonna get high ‘til the day I die.

MC5, primordial rock’n’roll, proto-punk, the protest that tears the Detroit of 1967 (Rama Lama Fa Fa Fa is the fourth track of their masterpiece, Kick Out The Jams – 1969) and hedonism, the nihilism made of whipped cream of the ecstasy generation (I’m gonna get high ‘til the day I die): the desire and the realization of being beyond one’s own body, one with universe, hearing colors and seeing love. In other words: guitars that sound like machine guns and MDMA. So far, so close.
It is not just about bringing rock into disco clubs: Aerosmith had already done that, and Run DMC in 1986 with the remake of Walk This Way (originally included in Toys in the Attic, 1975) or Beastie Boys, in a more shrewd, contemporary and seminal way, led by Rick Rubin with (You Gotta) Fight for Your Right (to Party) and No Sleep Till Brooklyn. Screamadelica is different: the unique conjugation of two worlds is an urgency which feels more real than aesthetic; is not a pose, it represents the natural gliding from one audience’s hemisphere to the other. It is getting off the stage (the place where live music raises its own myths) after one hour of fiery rock’n’roll and jump on the dance floor (the place where recorded music celebrates its protagonists: people).

Therefore, between popping pills and hitting the dance floor, it takes very little to make DJs become acquantainces, pals and inevitably professional partners, even more so for an open minded band such as Primal Scream.

The rising star of samplers and cymbals Andrew Weatherall decides to get his hands on I’m loosing more than I’ll ever have, a ballad from the Jagger-Richards partnership included in Primal Scream. He deconstructs it and reassembles it around rhythmic and vocal loops till it is transformed into an extract of modernity: Loaded. Released on February 1990, Loaded becomes THE dancing track of underground music in London over the short span of a few weeks. It spreads without any external promotional push and goes into the UK Top 20 only through enthusiastic word of mouth by DJs and ravers, in a way that traces the first wailings of disco music. The first cornerstone on which the whole Screamadelica base has been laid, and the next three singles (Come Together, Higher Than the Sun, Don’t Fight it, Feel it) will conclude the work, cementing the stylistic coordinates of this shift towards acid music and strengthening their position in the music scene as Scream will approach 1991.
The remaining six tracks in the album were written in a few months and are anything but fillers. The start is delivered to Movin’ On Up, a gospel of pure joy sprinkled with the percussion of Jimmy Miller, who had already been in the recording studio of the five most important consecutive albums in the history of rock (from Beggars Banquet in 1968 to Goats Head Soup in 1973, all of them by the Rolling Stones). A transfigured cover of Slip Inside This House by 13th Floor Elevator follows on, maintaining its original psychedelic note despite the tons of echo and groove which envelop it. Inner Flight lulls you, suspended as if it were the deepest point of a trip where everything is muffled and perceptions have slowed down, while Damaged takes you back to the Stones’ days. Acid makes its way to piano and guitar in more than five minutes of rare beauty.
I’m Coming Down recalls the indolence of the Jesus & Mary Chain (of which Gillespie used to be the drummer) before giving way to one of the less ordinary saxophones in the pop music. The closure is all for Shine Like Stars, where the acid echoes dissolve like the trip that gradually abandons one’s limbs and psyche. The clarity that comes back with a sense of purity tastes like childhood, like a sunrise on a pebble beach in Brighton, while night’s noises become more distant and the first light of day returns the correct definition to the inward and outward eye.
On September 23rd 1991, Screamadelica reaches record stores along with another masterpiece of alternative music, Nevermind by Nirvana (the two albums will contend British year-end playlists: Select and Melody Maker prefer the Scream while NME prefers Nirvana instead). The high light-heartedness of Primal Scream is at its top: but MDMA will soon make its way to heroin and to its inevitable down.