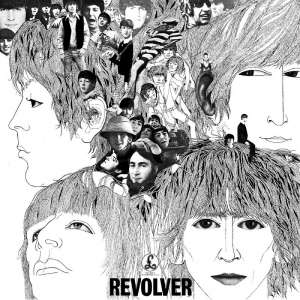 According to the official Beatles’ Canon, two are the sounds marking the limits of the most creative period of the band: the slightly dissonant chord at the beginning of A Hard Day’s Night, the opening title-track of the album released in July 1964, and the final chord – nearly a headstone – of A Day in The Life, at the end of the Sergeant Pepper album, issued in July 1967. It’s actually a largely factitious partition, as it doesn’t explain why many other outstanding Beatles’ songs can be found both in their first records, back to the exciting Beatlemania era, and in the later ones, at a time when the conflicts which would have led to the break-up were already present or exploding.

Anyway, if we accept this time standard, we can also find out, in the hypothetically best Beatles’ triennium, a third sound that, according to many, definitely mark the highest point of their career. It’s the opening four-second section of Taxman, the first song of the Revolver album, issued in August 1966, during an unusually hot and sunny London Summer, with a stylish cover by Klaus Voorman, a black-and-white collage of drawings and photographs. The fragment is a combination of sound materials, unbound from the song that is about to begin, and is composed by a voice counting “one-two-three-four-one-two”, the squeak of a turning mag tape, an electric ground vibration, a cough, and a quick guitar phrase. What might have been taken for a phonic joke, or a disarranged union of meaningless parts, was indeed a programmatic overture introducing and summarizing all the work behind the album.

In Revolver The Beatles’ voices and their traditional guitars-bass-drums triad – sometimes combined with George Martin’s pianism – are actually coupled to brand new ways of expressions, which add to the musical palette of the group colours and styles unheard until that time. Particularly those made available to the musicians through the innovative use of electronics in the recording and audio mixing process: overdubs, overdrives, extensive application of tape-loops – endless stripes of recorded mag tapes in order to create cyclic sounds – double-tracking and variation in the voices’ speed, inversions of musical phrases, signal filtering, noise insertions, etc. In short: the recording studio used for the first time as a musical instrument.

However, the amazing quality of Revolver shouldn’t be mistaken for a result of the mere use of the recording and editing skills for artistic purpose, in a similar way as William Burroughs did in literature with his cut-up technique. Indeed, the new passions and the multiple influences of that time on at least three of the four Beatles also contributed to the project: specifically, Indian music and philosophy on George Harrison, electronics, classical and avant-garde jazz music on Paul McCartney, the underground psychedelic culture and – let’s put it this way – the introspective and creative use of LSD on John Lennon. Starting from these premises, The Beatles’ Revolver – whose title could be mutually referred to the motion of the record itself on a turntable and a type of handgun – was able not only to aim at and shoot the standard pop-song format, but also to give the most attentive and perceptive listeners some advice to go beyond the sensorial – and spiritual – schemes of the old culture.

Revolver’s side one opens with Taxman, a resentful invective by Harrison against the greediness of the British government, evoked through the citations of Mr. Heath and Mr. Wilson, the two English prime ministers of the time. The following song is the extremely famous Eleanor Rigby, a sad meditation of McCartney’s on loneliness and death, performed by a string octet, masterfully arranged by George Martin. Lennon’s first number is the oblomovian I’m Only Sleeping, with its Indian coda and Harrison’s guitar solo played backwards, where the author praises the virtues of indolence and laziness – or, perhaps, of the lysergic dream he was perpetually sunk into. Harrison on sitar, backed by tabla percussions, follows before soon in Love You To, partly a philosophic and partly a love song. McCartney returns with Here, There and Everywhere, perhaps his best romantic song ever, a bittersweet evocation of the joys and sorrows of a relationship. Yellow Submarine, composed chiefly by McCartney, is the usual number the colleagues used to hand over to Ringo Starr in every album. It’s nothing more than a simple sing-along song, fit for children, with just an accompaniment of trumpets, whistles and squalling voices, but with a melody so captivating to have forever been rooted into the collective memory. She Said She Said is a pure-state Lennon song, its author being an easy prey for anguish and painful insecurity, a man frightened by death and full of regrets for his forever lost childhood.

Side two starts with Good Day Sunshine, an easy and elegant evocation by McCartney of the gorgeous 1966 English Summer, with a piano digression by George Martin. A powerful guitar performance by Harrison flavours And Your Bird Can Sing, a typical Lennon nonsense-song, which perhaps contains a hidden spiritual meditation, when it says that an analytical mind, even the most acute, will never be able to penetrate the mysteries of the world. The end of a love story is the theme of the classical-style song For No One, by McCartney, with a French horn accompaniment and the intervention of George Martin’s piano, whose sound was modified in the mixing process in order to make it play like a harpsichord. The other side of Lennon’s personality, the sarcastic, irreverent one, clearly appears in Doctor Robert, a song describing a weird New York physician, who used to prescribe his patients amphetamine and vitamin cocktails. Actually the song strongly criticize Timothy Leary, the quintessential Doctor, the Big Charlatan Priest of the underground culture, which counted Lennon himself among its followers. Harrison returns with I Want To Tell You, perhaps the less convincing song of the album, which is about the frustration of having many things to say in mind without being able to express them. Got To Get You Into My Life, a first-class song, with its horn accompaniment clearly on display, is McCartney’s explicit homage to the Tamla-Motown sound, and perhaps also contains a covered allusion to the use of marijuana.

Revolver closes circularly, in the same way it had started, with a song that, like the quick Taxman overture, is a metaphor of the whole album. It’s Tomorrow Never Knows, composed by Lennon using as a source of inspiration The Psychedelic Experience, a text by Timothy Leary. This essay, in turn, had been taken from the Tibetan Book of the Dead, and was used by the followers of the underground counterculture as a guide for their LSD trips. Tomorrow Never Knows – originally titled The Void – aims at depicting the authentic sense of the lysergic experience and is, actually, an exhortation to the dissolution of Self into the loving Void of the Universe. The music is an electro-acoustic pastiche where the four musicians’ influences mix and mutually blend: one can hear the obsessive and steady Starr’s percussions, the Indian sections of Harrison’s sitar and tanpura, McCartney’s – or, better, all the members’ – tape loops, and Lennon’s voice. This is doubled-tracked in the first part of the song and, in order to meet the author demanding requirements, filtered in the second to make it play like the voices “of the Dalai Lama and thousands of Tibetan monks chanting from the top of a mountain”. The outcome is extraordinary: Tomorrow Never Knows, completely different from the thirteen previous songs but perfectly aligned to the spirit of the album, flows swelled and slow like an Indian river and, at the ending of Revolver, leaves the listeners stunned, admiring and, in a way, eager to find out if and when the brilliant premises of that work would have been able to give new results in the records to come.

Symphonic and electronic, varied and coherent, wild and sensible, Revolver has the rare quality of being innovative and popular in its sound, very high but not cryptic in its themes. Moreover, it faithfully portraits a time and a social situation very fruitful for the world and the new culture. It is, in short, a founding work of the rock music, and one of the absolute milestones of the genre, which many groups after The Beatles have felt and will feel the need to confront with.