Home Reviews Those amazing records! The Who – Tommy 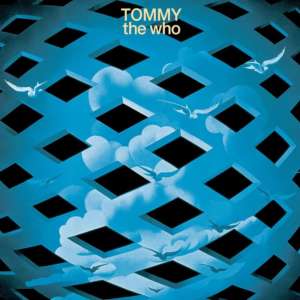 Tommy? Yes, indeed. If not the first, then certainly one of the first rock operas, and surely the greatest of them all, whose fame would not even be equalled by The Who’s later masterpiece Quadrophenia (1973). Tommy, the two black vinyl records and the gorgeous, evocative cover, with a flight of doves in a blue sky, and the obscure structure of blind spaces; Tommy, which after its release and the world tour that followed, turned a London rock band, who until then had produced just a handful of top-ten singles, into a supergroup that was irresistible in live concerts and had absolute authorial dignity;

Tommy, whose unstoppable growth had begun to take on a life of its own, breaking free of its creators and practically devouring their success; Tommy the album, which became Tommy the ballet, staged in 1970 by Les Grands Ballets Canadiens; and then in 1975 Tommy the film, directed by Ken Russel, the English visionary film-maker who cleverly cast, along with the four members of The Who, the actors Ann-Margret, Oliver Reed and Robert Powell, and rock-stars Eric Clapton, Tina Turner and Elton John.
Tommy’s story is rather illogical and disjointed on the record, but is largely redeemed by the songs. Mrs. Walker, the wife of a British captain, missing after the First World War (Overture), gives birth to Tommy (It’s a Boy) but then falls in love with another man. After some years, the captain returns home and surprises his wife with her lover. A mysterious act of violence takes place between the three, and Tommy, who is present, undergoes a psychic block, becoming deaf, dumb and blind (1921). The boy, who maintains only his sense of touch, can sense vibrations (Amazing Journey/Sparks), but is locked in a state of apathy that keeps him from establishing any relationships with others (Christmas). After some risky encounters with bullying (Cousin Kevin), paedophilia (Fiddle About), and drugs (The Acid Queen), Tommy grows up and, despite his situation, learns to play pinball, becoming a champion (Pinball Wizard). A physician (There’s a Doctor) finds a cure for him, encouraging in Tommy a fascination with his own reflection in the mirror (Go to the Mirror!). But his mother, who cannot stand Tommy’s inertia, smashes the mirror (Smash the Mirror), triggering the young man’s recovery of his lost senses and leading him to a state of enlightenment (Sensation, I’m Free). Regarded as a miracle, this event turns Tommy into a new Messiah: he organizes mass meetings and gathers his followers together in a holiday camp (Welcome/Tommy’s Holiday Camp). Here they are submitted to a crazy rite of liberation. To attain salvation, they have to wear eyeshades, earplugs, and corks in their mouths, stand in front of pinball machines and re-enact the things Tommy did before he was cured. When the disciples, disgusted, revolt and destroy the camp (We’re Not Gonna Take It), Tommy finds himself alone again, in a state of apparent Nirvana (See Me, Feel Me, Touch Me, Heal Me/Listening to You).
It’s well known that the real author of or, rather, the inspiration for Tommy, was Pete Townshend. In Tommy’s Fall and Liberation story, in his unresolved succession of darkness and light, Townshend metaphorically goes through his own life, uncovering its thorniest events: from his lonely and reclusive childhood, when he met with the hidden dangers of paedophilia and the abuses of bullying, to drug addiction; from the dullness of everyday life on the outskirts of London to the heady and fleeting dazzle of success; from the gloom of depression to the inner enlightenment he reaches after discovering Indian mysticism and the teachings of guru Meher Baba (to whom Tommy was dedicated).
However, if the other three members of The Who had left the creation of the whole work to Townshend, the result would probably have gone down the risky road of spiritualism. Even though they left the composition of the vast majority of the album tracks to their leader, they succeeded in enhancing Tommy not only with their own artistic performances, but with some ideas of their own, which lightened the plot and injected a generous dose of irreverent British humour. Just two examples: the inspired idea of using pinball as a means of reaching inner liberation – as the lyrics in Pinball Wizard tell us, pinball can be found “from Soho down to Brighton”, in any amusement hall in London and its surrounding areas. And the brainwave, attributed to Keith Moon, of making the venue of Tommy’s spiritual centre not the banks of the river Ganges, like The Beatles’ exclusive Rishikesh, but a humble Holiday Camp, the favourite holiday destination of the British working classes.
Some may find Tommy a rather stodgy Eastern-British pastiche, with a confusing plot, full of flaws and contradictions. However, what elevates it, what gives it a touch of the sublime from the first note to the last, is the energy and magnificence of its music.
Because Tommy is, above all, a Sixties British rock album, and The Who are among the greatest champions of that music. Because Overture, 1921, Amazing Journey, Cousin Kevin, The Acid Queen, Pinball Wizard, Sensation, I’m Free, We’re Not Gonna Take It – and other tracks – are formidable songs. The Who’s original wildness, without losing any of its basic strength, has not been softened or tempered, but is sharper and more polished than before, thanks to brilliant musical writing, wider-ranging but unobtrusive instrumentation, and an accurate recording technique; because Pete Townshend is a majestic lead guitar player, fluidly ranging from rhythm guitar to solos, and alternating powerful chords with gentle chromatic scales; because John Entwistle is an exceptionally talented bass player, with the gift of being able to turn his instrument from a mere rhythm-keeper to a creator of pulsating melodies; because Keith Moon is a tireless and eclectic drummer, able to meld instinct and technique harmoniously. And finally, because Roger Daltrey, a wild and powerful but also sensitive and well balanced singer, will stand memorable forever for his representation of the deaf, dumb and blind kid who soared towards Nirvana by playing pinball.

Chandramohan Sathyanathan
I am a primate dwelling in the wild forests of my language. My tongue lost irretrievably in the swamp of hunger, I hide amidst the barren rocks. Your own selfie sheds...