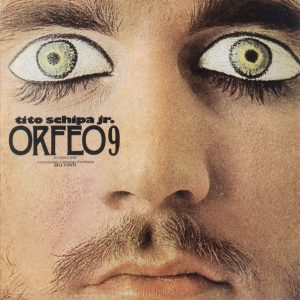 It was 1974. I was 16 and had a girlfriend who had just given me Tito Schipa Jr’s Orfeo 9 (Orpheus 9), an album that had been released few months earlier. I used to listen to Jethro Tull, Gong, Deep Purple, Frank Zappa, Miles Davis and, together with a good deal of my friends, I had committed myself to change the world and to “crear dos, tres, muchos Vietnam”, that is to say to create places where the American global capitalism should have been fought and defeated. Well, not an easy task. Anyway, I had all that a boy could dream of in the fabulous ‘70s.

So, Orfeo 9. I still remember the big black vynil – or, better, the two big black vynils, as it was a double LP record – and the strange cover: a face with two green eyes wide open. Still, it was immediately clear that the pupils had been painted on the eyelids, meaning that to see you don’t necessarily need to have your eyes open, and that perceptions can replace vision. This was Orpheus’s destiny and torment: actually, perceiving his beloved Eurydice’s presence behind his back, without being able to turn and look at her. The cover’s art director was Edoardo Sivelli, a real master in graphic design. Thanks to the mysterious ways of life I happened to meet him some years after, when he used my testimonial for one of his advertising campaigns.

First of all, I have to say that Orfeo 9 was the first rock opera ever to be produced and performed on stage in Italy. It made its debut in 1970 at the Sistina Theatre in Rome, and three years later it provided the material for a film and the record I’m dealing with here. The number 9 after the protagonist’s name is a tribute to The Beatles’ song Revolution 9. The author of the entire project – lyrics, screenplay, direction, and concept – was the son of the great tenor Tito Schipa, Tito Schipa Jr. For those who are not aware of this great artist’s fame, I will only add that Tito Schipa was the rival of Enrico Caruso for the rank of the best all-time tenor voice. Dualisms between major public figures are a classical Italian tradition, very popular also in many sports – just think of the competitions between Fausto Coppi vs. Gino Bartali in cycling, and of Gianni Rivera vs. Sandro Mazzola in football. Actually, the Italians need to create a conflict between two celebrities only to magnify the one they support.
Tito Jr, who was born and bred in a musical environment, did nothing less than stage an opera – a genre he was used to listen to and know in its classical form – using the tastes and the culture he had developed from contemporary rock music. Later on, he will also produce a personal version of Donizetti’s Don Pasquale.

In his book Orfeo 9, the Making – History, Characters, Fortunes of the first Italian rock opera (Orfeo 9, il making – Storia, personaggi, fortune della prima opera rock italiana, Editrice Zona, 2005) Tito Schipa Jr describes the birth of his passion, portraying it as a real act of kidnapping: ‘Your Honour, Your Honour! I would like to denounce a case of kidnapping. […] I am the victim. Who is the kidnapper? It’s a Lady, Your Honour. Yes, right, I should be pleased but the substance doesn’t change. And there are also many aggravations, the worst of all being the time of the crime; at first I was five. […] What about my parents? Nothing. They just agreed. […] It’s one of those stories with a careless Mom and with Dad a drug addict, etc. […] Therefore, who could imagine that such a pretty young lady, who came to my house riding a Vespa scooter, was the mastermind behind the kidnapping? […] She chained me up to the piano and played the game of the other one, of The Lady, yes, of the kidnapping big boss. Yes, sir, I remember her name very well. It’s not an easy name to forget. Her name is Music, sir.’

Besides Tito Schipa Jr, a group of first-rate artists of the musical scene of that time took part in the record production: the arranger was Bill Conti, an American composer that will write many important musical scores for films like Rocky (for which he’ll receive an Oscar nomination), Escape to Victory, Neighbors, Broadcast News, Lock Up and many more. Virtually unknown drummer Tullio De Piscopo provided a powerful rhythm section. Among the actor-singers we find Renato Zero and Loredana Berté (two fledgling talents at the time), the renowned Santino Rocchetti, a bold black voice performer, and the American blues singer Ronnie Jones that, in the final part of the film, sings a moving ballad.

I listened to Orfeo 9 hundreds and hundreds of times, until I was able to know by heart every single note and word of it. Together with Bruno, an old time friend, I even planned to stage a personal version of the play – both totally unaware of the complexity of the project. Moreover, as my first hi-fi stereo system entered my house not before December 1976, I had Orfeo 9 and all my records played for almost three years on a ‘Fonovaligia Lesa’ one speaker-turnstile, whose fidelity was very low. Anyway, this fact didn’t prevent the spreading of a disease that affects me even today.

Now I’m not 16 anymore and it’s over 30 years that I have lost every trace of the girl who gave me the record. However, I still treasure it, even if I bought the CD version. I still use to listen to Jethro Tull, Gong, Deep Purple, Frank Zappa e Miles Davis and, sincerely, I have never ceased to commit myself to change the world and to “crear dos, tres, muchos Vietnam”, as the heoric Comandante suggested.

‘The battle is won here,
The revolution is over.
He who struggled sincerely
Has already won his life.’
(from Orpheus’s awakening)