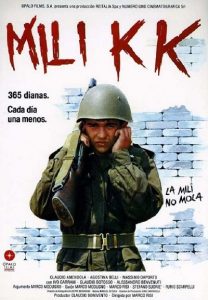 Surfing the Web, it is not unusual to find reactionary posts urging the return of compulsory military service. They are usually reinforced by “sagacious” statements such as: “I want it back, it would do a lot of people good”, “True, for women too”, “It teaches you to obey… and to be humble”, “Respect, good manners, rules”, “There’s no more respect…, a lack of good manners… and rules are considered crazy, just look around you…” (I report these comments in the very form in which they were written).

When you express an opinion on a subject, you should start with your own experience, if you have any. And then possibly extend your line of thought to what you have learned. In this case I have no qualms about starting with what I experienced personally, and I can say that no other year of my life was such a waste as the one I gave over to my compulsory military service.
Joining the Army doesn’t teach you to be humble. You just learn to be humiliated.
You obey, yes, like a slave on a chain does: that is, unwillingly. And you have to obey any squirt whose rank is higher than yours (that is, everybody). You have to submit to the “elders”, those who started their military service before you and who, for this reason alone, feel entitled to bully and even assault you if you don’t do their bidding; they who are, in theory, your peers (in Italy this practice is referred to as “nonnismo”). Perhaps this is what some conformists regard as “respect”, “good manners” and “rules”: the abuse of the weakest by the strongest.
Can we really respect those who don’t respect us at all?
Hierarchy is not good manners: it is tyranny. I would wish nobody’s child to be taught this kind of good manners. That doesn’t mean that I am a supporter of permissiveness. It means that inside the barracks I met only the worst specimens of mankind. I had already been taught obedience by my own parents, thank you very much. I didn’t need to be oppressed by those idiots in uniform, with no other right than that of coercion.
If parents have abdicated responsibility for educating their children, the Army will never be able to succeed where they have failed. Neither will the Education System, as too many parents seem to expect, although schools do have a key role in this matter. It is not the children who fail; it is those who have raised them.
Respect, humility, good manners, and the rules of civil society are values you can learn only from your family, not from institutions, which are too often examples of the exact opposite. If your children grow up flawed it’s often because of the wrong example they received from you. And then parents expect to have from their children the very things that they were unable to teach them, or even to do themselves.
To those who talk about compulsory military service without having experienced it, I recommend the film “Soldati – 365 all’alba” (“Soldiers – 365 days to dawn”) by Marco Risi, which gives a rather faithful account of what the Italian compulsory military service used to be.

This year we celebrate the seventieth anniversary of the end of the Second World War and, in our country, of Liberation. We, the people from Inkroci, would like that dark historical period to be remembered: that’s why over the course of the year we will be dedicating plenty of space to it, hoping  that another war like the one which ravaged Europe will never ever return, and that the propensity for militarism be dismissed. Forever.