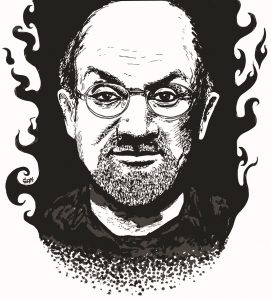 Once upon a time there was an ironic and debunking writer, who in 1989 was hit by a fatwa (death sentence) because his novel “The Satanic Verses” was considered blasphemous by Iranian ayatollah Khomeini. A little over 25 years have passed since. The fatwa was withdrawn, the writer – Salman Rushdie – has continued to publish his works and today he doesn’t live under police escort anymore. But in the meantime the world has not become a safer place. If fanaticism at that time had identifiable supporters, national borders and clear targets – which would then be easier to defend -, now danger is liquid, widespread and unpredictable. However, it is Salman Rushdie himself who sends a message of peace and tolerance. “War’s path is always a failure”, he repeated during his lecture at the 2015 Guadalajara International Book Fair. “Bombings and invasions, whether they are in Afghanistan or in a Middle Eastern country, create more problems than they can solve”. All the more because, according to Rushdie, we are now facing a totally new situation, due to ISIS’s capacity of using social media as tools to recruit and spread their propaganda, as well as promote terror among their first victims, namely Westerners and Muslims themselves.

Your latest book, “Two Years Eight Months and Twenty-Eight Nights” (Random House, £18.99), explores new territories: fantasy and fairy-tales. Should we understand it as a renunciation of current events as a topic?

Quite the opposite. Resorting to fantasy is not a means of evasion, but actually a way of talking about reality without sounding too literal or journalistic. I used the structure of a fairy-tale to write an enjoyable book, with that black humour that has always been part of my register.

Can this combination of fairy-tale elements and irony – tough never aggressive nor aiming to claim – be a weapon in the hands of culture against fanaticism? A way of stemming the power of the absolutist language of jihad, by which ISIS makes proselytes even among young Europeans, thought to be beyond suspicion…

We need to look for a strategy that could make good look attractive. A language we could use to approach dark matters in an indirect, lateral way. Nobody wants to look into the abyss of evil and discover what it looks like. Forcing the reader is counterproductive. I believe humour to be a good strategy both to fight fear and to take down the aesthetics of jihadist fanaticism.

In the book we see a battle between good and evil. Is it a metaphor for the battle of democratic values against ISIS? Did you expect this to happen?

I began to think about this book four years ago, when ISIS did not look so threatening. I did not mean to be prophetic, quite the opposite: I was just exaggerating, but reality always exceeds fantasy. But fighting is a part of life, history is punctuated by wars. Our present situation is dramatic, but it is not the first time it has been so. Moreover, the battle between fanaticism and rationality occurs within individuals, too. Each of us has an intolerant, stupid side to keep at bay. If we really want to consider this book prophetic, it is a prophecy on human nature, rather than on history. It is not a novel about ISIS, but about the collapse of our values.

In your opinion, which elements caused the sense of bewilderment we have felt during this hectic year, which started with the attack to the editorial office of Charlie Hebdo and ended with the recent Paris terrorist attacks?

All of a sudden, the world we live in does not feel familiar anymore, the order we took for granted disappeared. Which is what the characters in “Two Years Eight Months and Twenty-Eight Nights” live through. But the book is not nihilistic, because it also talks about the strength people find within themselves when an unexpected event shakes their lives.

Did this happen to you? How deeply did persecution influence your work?

Of course it had an impact on my work, it could not have been otherwise. A writer uses every experience. But I did not want to become a consequence of it. I tried to avoid a vindictive tone and I believe I have succeeded.

Which is the role of a writer and of culture in general in such a historical moment?

His duty is to write and talk about the world, with honesty. The challenge is getting published. These are tough times for all: journalists, intellectuals, common people… However, I am not completely sure that we should write directly, on the spur of the moment, about the dramatic events we are living through. This does not mean that no good books will result. “War and Peace” was written 60 years after Napoleon’s Russian campaign. I believe that those novels about the attacks of Islamic fundamentalism that will be published in 40 years’ time will be better than those that could be published today.

Why a trip around the world’s circumference?