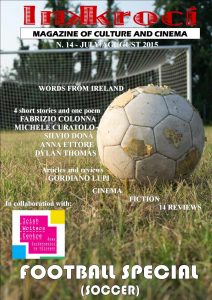 perhaps some of you will be surprised to find out that this Inkroci issue is dedicated to soccer. Convincing our editorial staff to accept a subject that most of them considered with complete disinterest, suspect, or simply with incompetence was not an easy task.
However, I was able to devise a judicious persuasion tactic. In soccer terms, I would define it a sudden counter-attack manoeuvre or, should I use a more up-to-date expression, a perfect break. To explain how things (or, better, how the match) went, I shall continue by deploying this very jargon, the one in which I had first experienced as a young reader.
During the editorial briefings, I had to face those who, just at the mention of soccer, reacted reminding me of the fans’ violence, the useless waste of money, the inclinations of some of its most prominent representatives towards racism, homophobia and corruption, and even the present failures of the Italian National team. Having to face all this, without denying but steadily undermining all my opponents’ points, I suddenly began to quote books and films.
I quickly remembered The Critical History of Italian Soccer by the skilful and brilliant author Gianni Brera, who regards soccer not as a game, but as the living and genuine image of the people who play it. And then British ethologist Desmond Morris’s The Soccer Tribe, which studies this sport (and its alleged load of violence) from a sociological standpoint, representing it as a new kind of ritualized chase, where the goal is the prey and the ball is the weapon to hit it. And eventually Nick Hornby’s autobiographical novel Fever Pitch (that later became a film), which reveals the real nature of the fans’ passion, and explains why, for those who love soccer through the support to their own teams, it will never ever be “only a game”, but, rather, an existential condition or, even better, a destiny.
When I perceived my opponents’ sudden lapse of concentration, and realized that my dribble was totally unexpected, I carried on with the match, defining soccer as a sport which creates Beauty, and finally closed it by quoting soccer as one of the major producer of Happiness. In order to do so, I called Umberto Saba, the great Trieste and Triestina football club’s poet, as my witness. Saba is one of the very few writers who could sense soccer’s secret, its dual gift of Beauty and Happiness, the precious, intense and ephemeral mixture that springs from it, and heals, for just some fleeting instants, the bitterness of life:

Few are moments as wonderful as this,
to whom, burnt by hatred and love,
is given, under the sky, to see.
(from Goal)

Dearest readers,
you know from experience that, whenever one starts talking about books and films to Inkroci’s editorial staff, one can easily take the lead. And you know as well that, whenever one’s words concern Beauty and Happiness, the lead simply turns into the clearest of wins. There’s nothing like Beauty and Happiness to win the match against Inkroci’s editorial staff. And indeed, the match was brilliantly won! That’s why soccer has gained its space in our magazine.
In this issue, as befits in summer, we will deal with soccer lightly. From time to time we will publish happy and nostalgic soccer stories, some funny and some moving. In turn you will see famous and ordinary matches, and meet tolerably good players and soccer geniuses. Above all, you’ll meet the football fans, not as thugs, just as men, and will be acquainted with their adventures and their toilsome pursuit of Happiness.