Home The Magazine Editorial The Border 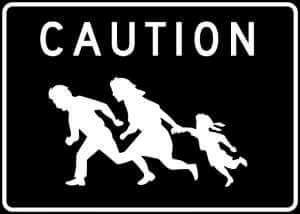 An interpreter, similarly to a translator, is always a symbolic boundary: he/she lies between two individuals and two worlds, between two cultures that are meeting. Often whoever is speaking cannot realize it, in the same way as who crosses a frontier does not necessarily see lines drawn on the ground. But he/she is precisely the line that allows two worlds to be told apart or communicate.

There is no such thing as literal interpretation, otherwise it would not be called interpreting. Interpreting is a word that speaks of wonders: it means reaching the understanding of something that is obscure, deciphering it and making it understood by others, through the knowledge and reliability of the person who is to perform the task.

Dreams, theatrical works, mysterious phenomena, prose and prophecy are interpreted, as well as unknown languages ​. There is no textual interpretation as such: there is only a faithful interpretation; knowing that, anyway, whoever translates is betraying, because in any case he/she chooses a meaning and a meaning only, therefore abandoning other possibilities. But inevitably, moving from one language to another, from one world of meanings to another, means making a choice and take on responsibility.

The translator always constructs – with his own words – a bridge that allows individuals sometimes very, very far from each other, to meet halfway, or at least at a closer point; because translating involves, as it is in its Latin origin, carrying, transferring, moving beyond, and thus moving meaning and lives on this symbolic bridge to reach from one place to another, being equally expressive and understood.

For this reason, it is not only is it necessary to have language skills to be able to deal with this task, but also to possess quite magical talents, I would say. A good interpreter is necessarily rich in sensitivity, knows how to read silences and expressions, is well educated, but perhaps, to a larger extent, has all the curiosity that allows him/her to get involved, to re-discover and recapture on what he/she already knew, with no fear of doubt. The interpreter/translator can swim in currents of meaning that threaten to overturn him/her and he/she can walk him/herself on an unstable rope. He/she can breathe deeply and open him/herself to the new, with the sacredness of a rite that connects the essence of two human beings.

Interpreting and translating in the end are the same as writing: drawing permanent lines of words, in the air that carries them, or on the paper that imprints them forever.