Home The Magazine Editorial Why a trip around the world’s circumference? 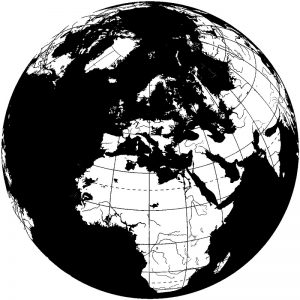 The contributions Inkroci will publish as “Literature from around the world” are meant as a tribute to the literature of exploration and popular narratives of ancient explorers who, with their stories , helped to broaden the view of the world at the time, influencing the discoveries and voyages to come.
A many of these books were being written, some of the continents were not yet discovered, while others had been explored only partially, and their characteristics had not yet become common knowledge. This is, of course, from a Eurocentric point of view, the perspective from which the old continent watches the world.
For this reason, in addition to European explorers, we have also chosen writers from other worlds (as in the case of Ibn Battuta, born in Morocco, or Leo Africanus), who explored the planet from North Africa, crossing Europe and Asia, . Next to them, we have also included Ma Huan, a Chinese storyteller who was sent by the Emperor to accompany a naval expedition to explore about the Western Ocean.
It seems important to highlight the hard work and slow rate of travel that, in ancient times, was only accomplished in several years, if not lifetimes: on the road, hiking, crossing step by step along what was the circumference of the world – sometimes costing the explorer’s own life.
A gap was being opened, allowing for more cultural exchange, unlike nowadays, where the speed of displacements is not heading to a transit and a gradual progress within an unknown universe.
The voyage involved a fatiguing move, grasping a variety of sides, the wonder and the partaking of a nomadic culture that now our culture has banned and ostracized.
Yet the ancient world was much more diverse and complex than we tend to think : traveling was extremely difficult and dangerous, but the cultures’ co-mingling, the mixtures and hybridizations were more frequent and widespread, and life was fulfilled and conquered on the road.
Imagine the fact that Marco Polo was a merchant who eventually became an ambassador. He did not speak Italian very well, while he probably knew Persian and Chinese. His memoirs were written by a compiler who wrote “The Million” in Old French, not Italian.
Leo Africanus was not an African, but an Arab born in Granada in southern Spain, at the time of the Christian Reconquest of the Iberian Peninsula.
These trips, and even more the very lives of the explorers, are a testament to how identity can be composed of variable data and culture can be a permeable building, soaked with a hard-won elsewhere. Each being within is enriched with the quietness of an observer, not touching it with the haste of a distracted judge.