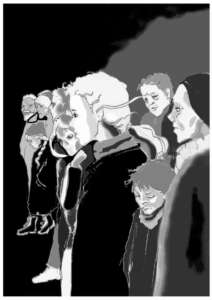 She looked up into the sky. The light was escaping at its edges and the moon was just becoming visible. No stars yet. There was a narrowing of the path in front and the crowd slowed down as people filtered through in fewer numbers. She knew this was an ending of something and she was sure there must be other people, in this new night, that felt the same as her.

This short story is taken from the book: