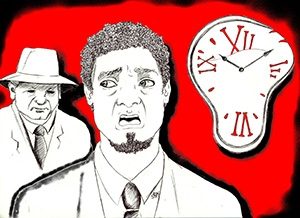 It had not been that easy to come to terms with it: too often his days would end too quickly. In the beginning, it didn’t even seem that this was the real problem.  Time, as is it known, marches on, and yet, despite this, a restless feeling kept coming over him. One day, however, Diego realized that something was wrong in his life. His belief that the time was running out tormented him and prEvanted him from making plans, from enjoying life. So, one fine morning, he began his day with a very clear idea in mind: he had to control everything, every hour, every moment, in order to avoid any distraction.

He went to the bank, as always. He had already managed not to linger in bed or while making breakfast. He walked quickly to catch the bus and then to the office. Like every day, only this time with a different focus. In the late morning, unfortunately, he happened to loose his focus for a moment and immediately, the next second, he became painfully aware that all his good intentions had vanished into the daily grind.
As usual, as it had been for a long time, something was wrong.
Little by little, the idea that dwelt in a hidden corner of his mind took a more distinct shape. “Weird, how is this possible? Yet, it can’t be otherwise.”, he thought.
He had the impression that he was being incessantly robbed, as if, in some dark place of his existence, a thief was lurking. Of course, this idea was insane, but at least it was a starting point on which to build, Evan if he couldn’t talk to anybody about it.
He had tried before with his wife, in a desperate attempt to confide in someone.
«Eva», he said one evening, «I can’t stand it any longer».
«What are you talking about, Diego?», she asked, surprised.
«My life is a disaster».
«What’s the matter?».
«Everything I try to do escapes from my grasp. Time scares me, it runs so fast, I can’t stop it».
He hesitated a moment, then continued: «I know time can’t stand still, but there’s something more. I have the impression that someone is stealing it from me».
He remained silent in the echo of his own words, realizing how strange his words were.
Eva scrutinized him, frowning. Then she approached him gently and smiled, stroking his hair.
«Don’t worry, you’re just tired. Things will change. When you’ll be less busy, everything will look different to you».
She hugged him for a while, then carried on with the household chores, and considered the incident closed. But for him it was not.

The next morning he was ready to start the hunt again: stake-out, stalking and night observation. He realized he had been spending too much time in that way only when he received a letter of dismissal from his office. “So much the better”, he thought. “When I solve this matter, I’ll find another job, I can’t think of this too!”.
After a few days, Diego began to see the little man again. He was struck, like something he had long been waiting for.
It happened on the street, like most things at that time.
It was morning, and as usual he was following the two women, when he caught sight of the neutral profile of his little friend on the other side of the street. He always looked the same. A little further on, however, he was swallowed up by the crowd and lost sight of him again. But he was back, and this filled him with a strange joy.
That afternoon, he noticed something peculiar. As he was sitting in the same garden, where he could keep the situation under control, he saw him entering through the gate and sit on a bench far away, next to a stranger.
“Strange”, thought Diego observing his little man, who seemed to act as if he was not there, “he’s ignoring me”.
Shortly after, he noticed the little man had turned to the person sitting next to him and had begun to talk to him, or rather, to enjoy a nice chat with him. And the man was replying to him.
It was the first time he saw him talking to someone else. Astonished, he began to study the situation, but as soon as he saw his wife leaving the office, he went after her.
As the days passed, he met the man more and more often as in the past, but now there was something new: the man didn’t chase him anymore, he was almost always in front of him, or walked on his own, in the places where they met. He spoke with others, gesticulating, laughing. He acted like a normal person. “It ‘s really strange”, reflected Diego each time. But he could not linger on that thought as he was busy following his wife.
Eva had become much more detached with him. Every time he came home, she appeared less and less interested, indeed, she didn’t seem to notice him anymore. He didn’t want to make a fuss, also because he didn’t have the time, and he resolved to clarify everything once he had settled that matter.
One afternoon, he happened to pass, by accident, in front of his old office. He had arrived there because he was following the little woman who was following Eva who had decided to visit a store nearby.
As usual, Diego waited in the street to avoid being seen and, focusing on the familiar windows of his old workplace, there he saw the face of the little well-known man talking to his colleagues.
He threw down the cigarette he was smoking, more irritated than upset. «You again», he said to himself. «What the hell! But you’ll see, one day it’ll all be over!».
He turned away and went back to staring at the door of the store where his wife was shopping.
“Winter is over”, he mused a few nights later, while standing on guard outside the house. “Now it’s no longer so cold when I have to wait outdoors”. He thought this with a kind of relief.  In that season it became dark later and he could stay outside for longer. When he decided to return home, it was nine o’clock.
He entered and said hello to his wife from the entrance hall. He got no answer. Yet, he was able to hear a slight rustling in the other room. He looked into the room and froze. Eva was sitting on the couch. He, the little man, was sitting in the chair in front of her, smiling and chatting with her. As if that was his home.
The mirror of his mind broke and he suddenly understood.
He shouted his wife’s name. He called her, in desperation. But neither of them in there could hear him.